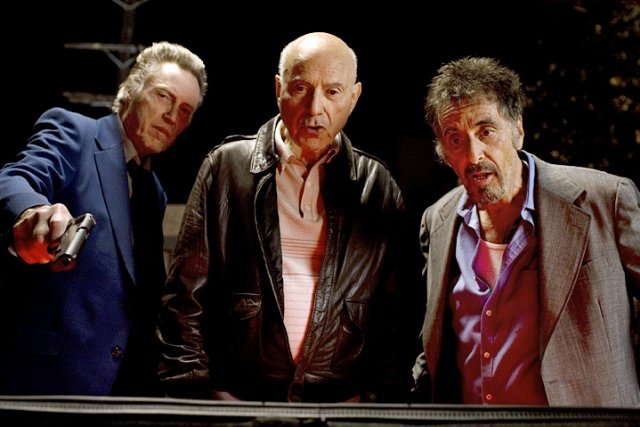 He is ready to welcome his old friend who is finally released from prison after 28 years. They are still dear friend to each other, and they are going to have some fun for remembering their good old days. It may be their last night, but these old guys do not seem to worry much about what will happen on the next morning. Moving around several places amidst their lonely urban night, they observe and muse on their difficult situation with old men’s bitter humor as the time goes by, and the moment of decision is inevitably approaching to them as the sunrise begins.

“Stand Up Guys” is a small low-key character drama depending on the style and performances more than the story itself. Its story feels contrived at times and depends on coincidences a little too much, but it is an engaging story thanks to the performances from three aging actors we have been familiar with through many movies. They quickly establish their respective characters right from their first appearances, and we begin to enjoy how they interact with each other in front of the camera.

Christopher Walken, who looks more introspective and genial than before as he recently did in another quiet character drama “A Late Quartet”(2012), plays Doc, a retired criminal who has spent his time with drawing sunrise paintings at his small but cozy apartment. His tough days passed a long time ago, but now he is forced to do something he does not want to do at all – killing his close friend Val(Al Pacino).

They meet each other as soon as Val gets out of the prison. They do not say a lot about what they did during their past or what happened during their unfortunate incident 28 years ago, but the bond between them is visible to us even though they have not seen each other for many years. Val has been a good stand up guy who did not tell anything about his colleagues during 28 years, and Doc wants his loyal friend to have a fun as much as he can as a free man. He takes Val to a bar and allows him to use the drugs they steal from a drugstore. He also takes him to a local brothel run by Wendy(Lucy Punch), whose mother was well acquainted with them in their past. Val takes too many Viagra pills for having sex at point, so we get a funny scene involving the serious tumescence of a certain body part.

As demanded by a local crime boss Claphands(Mark Margolis), Doc has to kill Val within hours. He will probably be killed along with Val if he doesn’t. When his guess is confirmed by Doc, Val is not so surprised about this because he has expected that kind of retribution. Claphands’ son was somehow killed by Val during that incident, and this old vicious man is determined to have his revenge on him. Claphands’ two henchmen keep appearing in Doc’s sight to pressure him, but neither Doc nor Val feels particularly threatened. They are very old, but they are the guys with few things to lose and few years to live.

While they are well aware that something should be done no matter how they feel about their situation, they keep moving around the night streets as coming across several lucky coincidences. When Val and Doc come to the hospital for an emergency problem, they encountered a nurse who is none other than the daughter of their old friend/colleague who was their wheelman. Nina(Julianna Marguiles, who holds her own little place well between two senior actors) tells them that her father is still alive and is living at a home for the aged, and they go straight to that place for meeting him, and Hirsch(Alan Arkin) instantly joins them even though he is suffering from emphysema. After taking a few breathes from his oxygen tank, Hirsch immediately sneaks out of the place with his friends, and he soon finds to his excitement that he has not lost any of his skill as an expert driver while driving their stolen sports car.

I know it sounds quite unrealistic, but the movie does not try to look realistic from the beginning. The anonymous night streets its characters move around feel stark and empty, and there are not many people and cars in the movie. Wendy’s brothel, where Hirsch gives two girls an experience to remember, seems to have only two girls besides Wendy, and a diner where Doc frequently visits seems to have only one waitress. Her name is Alex(Addison Timlin), and we are surprised when it is revealed later that she means a lot to Doc.

While their performances in the movie may not be remembered as the best ones in their respectively illustrious careers, watching Christopher Walken, Al Pacino, and Alan Arkin in one movie is not something we can see every day, and they support the story and their characters with their mere presences. While Walken subtly suggests his character’s mixed feelings behind his quiet patience, Pacino brings pathos to his shabby character in a restrained performance, and they somberly click well together as the characters with a long history between them. Arkin is dryly humorous as usual between his two co-actors, and I think he had an amusing time when playing behind the wheel during one car chase sequence. How many old actors as aged as him can get a chance like that?

Noah Haidle’s screenplay is not without flaws, but it instead provides a nice playground for these three exceptional actors, and the director Fisher Stevens draws good performances from them through small moments. Although the result is pretty modest, his actors bring something special to their movie, and the movie becomes a poignant tale about the aging tough guys’ attempt to have the last big fun before their final destination. They are old, but they can try anyway.

This entry was posted in Movies and tagged Aging, Criminal. Bookmark the permalink.