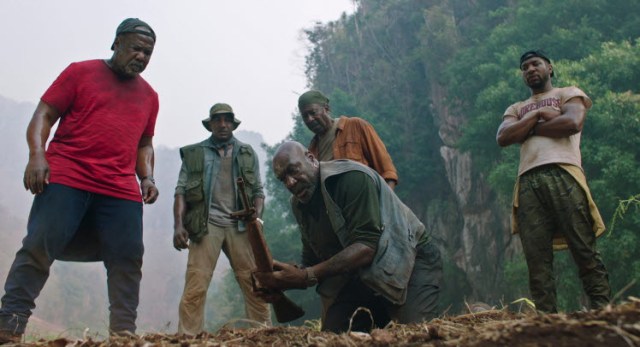 Spike Lee’s latest work “Da 5 Bloods”, which was released on Netflix on last Friday, is quite a compelling mix of adventure drama, social commentary. and history lesson. While it is rather uneven and a bit too overlong in my inconsequential opinion, it is entertaining to watch how confidently and joyously Lee juggles disparate elements together for another ambitious project in his bold and distinctive filmmaking career, and you will come to enjoy its numerous good moments while marveling at how skillfully he handles its improbable narrative concoction.

After the prologue part which gives us a quick history lesson on the Vietnam War and the social turbulence in US during that intense and chaotic period, the movie begins with the arrival of its four African American main characters in Ho Chi Minh City, Vietnam at present. Around 50 years ago, Paul (Delroy Lindo), Otis (Clarke Peters), Eddie (Norm Lewis), and Melvin (Isiah Whitlock Jr.) fought together in Vietnam under the command of Norman Earl “Stormin’ Norm” Holloway (Chadwick Boseman), and their official purpose of visit to Vietnam is retrieving the remains of Holloway, who, after getting killed during a very intense combat, was buried at a certain spot located in some remote forest area.

It soon turns out that our four main characters are hoping to find something else besides their dear commander’s remains. At that time, they and Holloway were on a mission to find a crashed plane belonging to CIA, and that plane contained a considerable amount of gold bars, which were supposed to be delivered to local tribe people fighting against those Vietcong soldiers. Once they found these gold bars in the plane, Holloway, who was your average progressive African American intellectual, suggested that they should keep these gold bars for themselves to help and benefit many fellow African Americans in the country, and his four men did not object at all. As reflected by one scene which virtually functions as a social/historical lesson for us as well as them, they learned a lot from Holloway on how the country has been very unfair to African Americans since the very beginning of its history, and they were certainly eager to give a middle finger to the establishment which unjustly forced thousands of young African Americans into the war (As it is directly pointed out to us in the movie, more than 30% of the American soldiers sent into the Vietnam War were African Americans although African Americans were only around 10% of the whole American population at that time).

Anyway, our four characters, who are quite old now, certainly need some local help for their private mission. While a local guide named Vinh (Johnny Trí Nguyễn) is going to lead them to that forest area in question without knowing anything about their private mission, Desroche (Jean Reno), a shady French business guy introduced to them via an old friend of Otis, will help them getting gold bars out of Vietnam, though, not so surprisingly, he demands a considerable price for his service.

And then there comes a little setback for their plan. Paul’s estranged son David (Jonathan Majors) follows after Paul and his gangs shortly after learning of their plan, and he adamantly insists that he should accompany Paul and his gangs. Although Paul is not so pleased about his son’s interference, he and his gangs eventually agree to let David go along with them, and we soon see their departure, which, to our amusement, is accompanied with a certain piece of classic music which was memorably used in “Apocalypse Now” (1979).

Along their journey, our four main characters are often reminded of their old war experiences, which still vividly haunt each of them even at present. In case of Paul, it is apparent that he has suffered a worse case of posttraumatic stress disorder (PTSD) compared to others, and he also becomes gradually paranoid with more distrust and suspicion – especially after he and his gangs finally come to locate where Holloway and gold bars are buried (Is this a spoiler?).

As the mood subsequently becomes more serious before, the movie enters the territory of “The Treasure of the Sierra Madre” (1949), and Lee deftly rolls his story and characters from one wild moment to another while constantly throwing sharp moments of social commentary at us. There is a tense and striking scene involved with landmines which are still dangerous even after more than 40 years, and then we are served with a rather amusing scene involved with a bunch of local gangs, which not only gives a wink to that famously misquoted line in “The Treasure of the Sierra Madre” but also makes a mandatory point on how much Vietnamese people suffered during the war.

With these and many other elements thrown into its mix, the movie understandably feels disjointed from time to time, but Lee, who developed the screenplay along with Kevin Willmott from the one originally written by Danny Bilson and Paul De Meo, and his crew members deliver its many key moments with enough skill and style to hold our attention during its 155-minute running time. While cinematography Newton Thomas Sigel establishes a vivid local atmosphere on the screen in addition to masterfully switching between different screen ratios for dramatic effects, editor Adam Gough did a seamless job of maintaining narrative momentum to support Lee’s occasionally sprawling storytelling, and Terence Blanchard’s score sometimes goes on a full throttle mode as required in addition to being an effective counterpoint to several songs of Marvin Gaye on the soundtrack.

Above all, Lee draws the excellent performances from his main cast members. With several awesome showstopper moments which may make him a serious Oscar season contender, Delroy Lindo inarguably gives the best performance in the film, but Clarke Peters, Norm Lewis and Isiah Whitlock Jr. also have each own moments to shine as steadily holding the ground for Lindo. While Jonathan Majors, who previously drew our attention with his wonderful performance in “The Last Black Man in San Francisco” (2018), holds his own small place around his four senior performers, Chadwick Boseman, imbues his character with an ample amount of charisma, intelligence, and leadership, and Lee wisely has Lindo, Peters, Lewis, and Whitlock appear along with Boseman in the flashback scenes instead of digitally de-aging the quartet like Martin Scorsese did to his main cast members in “The Irishman” (2019). This may look a bit odd at first, but it feels far less awkward than the digital de-aging effects of “The Irishman” (Well, what can possibly beat natural human faces?), and it makes perfect sense in the context while also generating some poignancy.

Thanks to Lee’s considerate approach to the story and characters, a number of minor supporting characters popping here and there around the story are presented with humanity and personality, and the performers playing them are clearly having a ball with their respective parts. While Jean Leno, Paul Walter Hauser, Jasper Pääkkönen, Jasper Pääkkönen, and Mélanie Thierry fill their spots as required, Johnny Trí Nguyễn, Veronica Ngo, and Lê Y Lan are also solid as the crucial local characters in the story, and I particularly appreciate a small moment when a casual conversation among a group of Vietcong soldiers is translated to us via subtitle. Directly criticizing “Rambo: First Blood Part II” (1985) and other similar Hollywood action films set in Vietnam, the movie naturally takes a more considerate viewpoint on Vietnam and its people, though it ironically culminates to a climactic action sequence where its main characters come to take their last stand against those local bad guys.

In conclusion, “Da 5 Bloods” is imperfect to say the least, but the overall result is fantastic enough to overlook these flaws in the film, and I admire how boldly Lee reaches for many different things ranging from the Boston Massacre to Black Lives Matter movement within the epic background of the Vietnam War. When he received an Honorary Oscar in 2015, we thought that was too early for a consummate filmmaker who has never stopped since “She’s Gotta Have It” (1986), and, what do you know, he has kept going as usual while giving us “BlacKkKlansman” (2018), which won a Best Screenplay Oscar for him. With “Da 5 Bloods”, he certainly demonstrates again that his filmmaking career is far from over, and he will definitely continue to interest and entertain us with some social enlightenment for us. 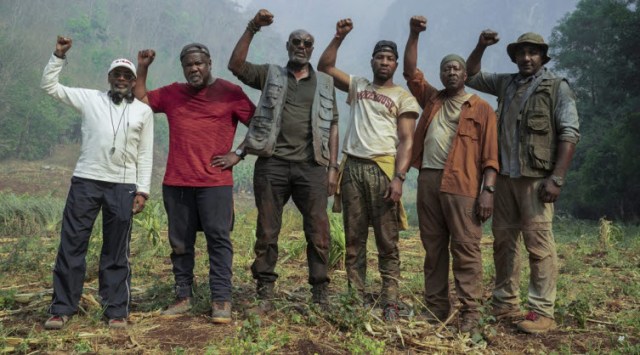 This entry was posted in Movies and tagged action, Old Man, The Vietnam War, Treasure, War. Bookmark the permalink.