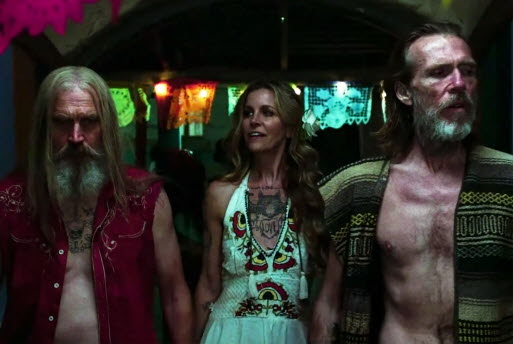 Rob Zombie’s latest work “3 From Hell” is morbid, violent, and humorous as your average seedy exploitation horror film. Although it is relatively less enjoyable than its predecessor “The Devil’s Rejects” (2005) for a number of reasons, I will not deny that I alternatively cringed and chuckled while entertained by its bold attitude as well as its wry, vicious sense of humor to some degree.

As many of you know, Zombie made a feature film debut with “House of 1000 Corpses” (2003), which is a loony comic variation of Tobe Hopper’s infamous horror film “The Texas Chain Saw Massacre” (1974). Although I did not like that film much for its thin narrative and characterization, I found myself amused a lot by its sequel “The Devil’s Rejects”, which is certainly better than its predecessor in terms of plot and characters while giving several hilariously naughty moments such as when a movie critic is invited for providing some background information on Captain Spaulding (Sig Haig) and his murderous family members, whose names are incidentally derived from the movie characters played by Groucho Max.

At the end of “The Devil’s Rejects”, Captain Spaulding and his two surviving family members, Otis B. Driftwood (Billy Moseley) and Vera-Ellen “Baby” Firefly (Sheri Moon Zombie, who is Zombie’s wife), are gunned down by the police in a spectacularly violent way no so far from the finale of “Bonnie and Clyde” (1967), and it looks like they are all dead as a result, but the prologue part of “3 From Hell” shows that they actually manage to survive and then are brought to their trial once they get recovered enough for that. Just like that homicidal couple of “Natural Born Killers” (1994), they receive lots of attention from the media and the public during the trial, and they remain pretty infamous even after they are sent to a prison where they are going to be incarcerated for the rest of their life. 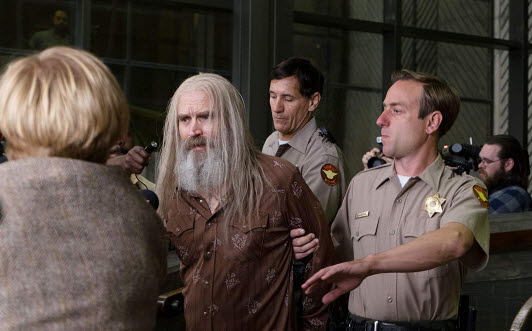 Several years after Captain Spaulding was executed (Zombie had to reduce Haig’s role considerably because of the deteriorating medical condition of Haig, who sadly passed away shortly after the movie was released in US in last month), Otis comes to escape from the prison with the assistance from his half-brother Winslow Foxworth “Foxy” Coltrane (Richard Brake), who is as deranged and dangerous as Otis and Baby. When Otis and Foxy happen to come across a pair of redneck hunters at one point, it does not take much time for them to turn the tables to their advantage, and we accordingly get a brief but gruesome moment which will surely make you wince a lot for a good reason.

Meanwhile, Baby is still incarcerated in the prison, and she keeps sticking to her crazy and cheerful remorselessness as often drawing the ire and spite from a sadistic prison guard who seems to be obsessed with her in a rather unhealthy way. When she has Baby attacked by two nasty prisoners for punishment, Baby surely shows the guard how lethal she is, and that certainly makes the guard upset more than before.

In case of the warden of the prison, he is quite determined to catch Otis and Foxy as soon as possible, but, of course, he seriously underestimates how bold and insane they are, and he belatedly comes to realize that when he comes back to his residence as usual during one evening. As Otis and Foxy hold several people including his wife as hostages, the warden has no choice but to follow their demand, and Zombie does not disappoint us during the following sequence, which is wryly and violently presented in non-chronological order.

And then the movie shifts itself onto a relatively milder mode as its three lead characters go south for crossing the Mexico-US border. At some shabby cantina, they become a bit more relaxed while throwing themselves into booze and sex, and it looks like they are finally free and happy, but, of course, they soon find themselves in another dangerous situation.

While serving us more blood and violence during the following climactic part, Zombie’s screenplay does not generate enough tension to engage us for several reasons. For example, it does not have any strong opponent to clash with its three protagonists, and I must say that, compared to a fanatically zealous sheriff played by William Forsythe in “The Devil’s Rejects”, those several supporting characters pitted against the three protagonists of “3 From Hell” are mostly flat and bland on the whole. In addition, the understandable absence of Captain Spaulding, who is definitely the most memorable character in both “House of 1000 Corpses” and “The Devil’s Rejects”, remains to be a glaring flaw, and that makes us miss more the gleefully over-the-top performance of Haig, who did his reduced part as much as he could with a dental condition which looks quite improved compared to the one he had in “The Devil’s Rejects”.

Anyway, Bill Moseley and Sheri Moon Zombie have lots of twisted fun with their respective roles as before, and Richard Brake did a fairly good job as holding his own spot well between Moseley and Zombie. Among the other notable main cast members in the film, Dee Wallace is the definite standout, and she certainly gives us a few juicy moments to be savored.

I give 2.5 stars to “3 From Hell” because it is less successful than “The Devil’s Rejects”, but, in my humble opinion, it has more attitude, personality, and guts in its presentation of evil and violence compared to “Joker” (2019), which is merely dark and disturbing without much substance or personality. Sure, it is mean, brutal, and unpleasant to the core, but it has some style and personality to be appreciated, and I sort of admire that even as still flinching from its many savage moments.

This entry was posted in Movies and tagged Horror, Serial Killing. Bookmark the permalink.