“First They Killed My Father”, which is currently available on Netflix, is a dark, harrowing tale of survival filled with quiet but powerful moments of horror and sadness. Based on the memoir of the same name by Loung Ung, the movie presents a closer glimpse into the Cambodian Genocide via its little heroine’s innocent perspective, and I admire how it tactfully and respectfully handles its sensitive subject while never overlooking the human darkness inside its story.

In the opening scene, the movie succinctly establishes its historical background through a series of archival footage clips from the 1970s. During the late period of the Vietnam War, the American government went further with a series of attacks on the border regions of Cambodia where North Vietnamese soldiers were ensconced, and this harsh military campaign led to more anti-US sentiment among Cambodian people, many of whom accordingly came to support the Communist Party of Kampuchea, a.k.a. Khmer Rouge. As the American government later decided to exit from Cambodia as well as Vietnam around 1975, Khmer Rouge eventually came to win the civil war and overthrow the Khmer Republic, and that was the beginning of an enormous atrocity which would devastate the whole country.

When we meet Loung (Sareum Srey Moch) for the first time, everything seems fine and normal in the view of this little 5-year-old girl living in Phnom Penh with her dear family, but then we gradually sense the tension beneath the comfortable middle-class environment surrounding her and her family. As a military officer, Loung’s father is well aware of how dangerous the situation will be, but he does not want his children to get scared because of that, and we see him enjoying a nice dinner with his family while not saying anything worrisome to them. 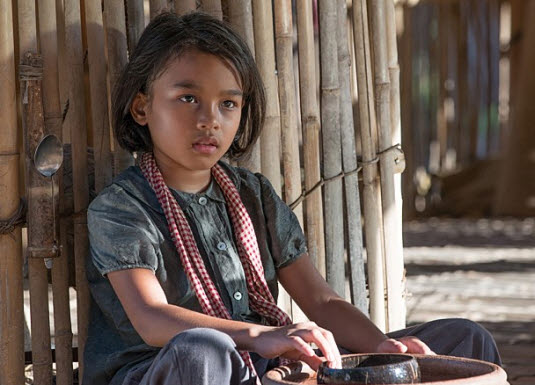 Not long after, Khmer Rouge comes into the city, and Loung and her family’s world is quickly turned upside down. Along with thousands of citizens in the city, they are forced to leave the city, and the occasional overhead shots during this moment emphasize how helpless they are in this sudden circumstance. When Loung and her family later come across a brother of Loung’s mother, he is willing to provide them a place to stay, but then they have to leave his place because, as implied by one brief scene, he is not allowed to do that, and they eventually arrive in a labor camp along with many others.

What follows after that point is as stark and gut-wrenching as what is shown during the second half of “The Killing Fields” (1984), another memorable film which is also based on a real-life story from the Cambodian Genocide. Stripped of everything they have, Loung’s family and many others in the camp are relentlessly forced to do farm works everyday by Khmer Rouge soldiers, and the movie calmly observes how desperately Loung’s parents try to keep their family together. While keeping hiding his identity, Loung’s father does everything he can do for his family, but then there comes an inevitable moment he cannot possibly avoid, and it goes without saying that it is one of the saddest scenes in the film.

Meanwhile, we observe how Loung is influenced more and more by her harsh environment. After some of her siblings are separated from her, she is put into military training along with many other kids around her age, and they go through a series of training sessions including the one where a Khmer Rouge soldier aggressively pushes the party’s propaganda onto them. The country is tumbled into another war (This time, it is Vietnam), and Loung soon comes to face the horror of war as the war becomes more intensified.

The movie is not a pleasant experience at all, but director Angelina Jolie, who adapted Ung’s memoir along with Ung, constantly holds our attention through her understated but undeniably absorbing storytelling. She trusts us enough to let us gather what is going on around Loung, and I appreciate how a number of small subtle moments in the film effectively convey a lot to us. Regardless of how much Loung understands her new reality, we always discern her situation clearly as paying more attention to what is said or unsaid on the screen, and we accordingly come to emphasize with her more.

As shown from her previous film “Unbroken” (2014), Jolie is a good filmmaker, and she and her crew did a commendable job on the whole while never drawing unnecessary attention to their technical achievement. Shot in several locations in Cambodia, the movie is imbued with a vivid, distinctive period atmosphere, and cinematographer Anthony Dod Mantle, who won an Oscar for “Slumdog Millionaire”, often provides subdued lyrical moments which generate a striking contrast with many gloomy moments in the film. The sparse score by Marco Beltrami is judiciously used throughout the film, and I like how it slowly comes out of its restrained mode with considerable dramatic effect later in the film.

Mainly consisting of local performers, the cast is uniformly excellent in their unadorned natural performance. As the center of the movie, Sareum Srey Moch is captivating even when her character does not speak much, and she ably carries the film under Jolie’s competent direction. In case of the other performers surrounding her, Phoeung Kompheak is poignant as a decent man trying his best for his family, and Sveng Socheata is also effective in her supporting role.

Overall, “First They Killed My Father”, which was recently selected as the Official submission of Cambodia for the Best Foreign Language Film category of 2018 Academy Awards, is unforgettable for its undeniable emotional power, and I think it will be remembered well along with “The Killing Fields”. This is surely a touch stuff, but this is a superb piece of work nonetheless, and you will not be disappointed. 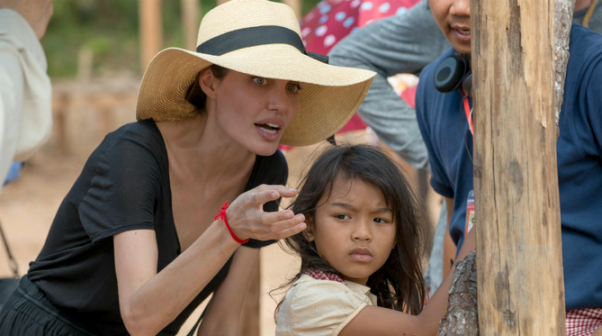 This entry was posted in Movies and tagged Family, Genocide, Real-life story, War. Bookmark the permalink.