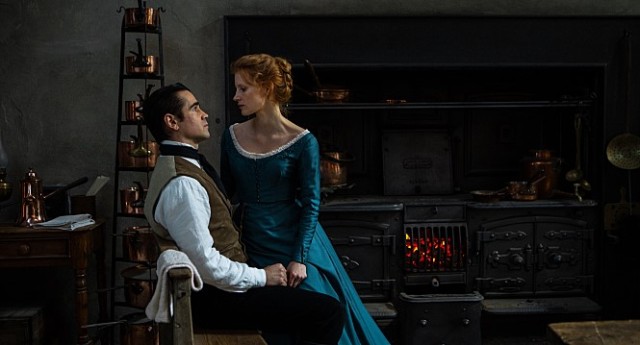 Although it feels stagy and stuffy at times, “Miss Julie” churns and then boils in its psychological conflict of sex and class. You know where it is going, and you will not be surprised by where it ultimately arrives, but it is compelling to watch none the less thanks to the nervous dynamics generated between its three talented performers on the screen.

Based on the late 19th century play with the same name written by Swedish playwright August Strindberg, “Miss July” is mostly faithful to its source while changing the background from Sweden to Ireland. It is Midsummer Day’s Eve in 1890, and John (Colin Farrell), a valet who works in some manor in Ireland, has just returned to the house after accompanying his master to a nearby train station. While talking with his fiancée Kathleen (Samantha Morton) at the kitchen where she works as the cook, John tells her about a strange recent behavior of Miss Julie (Jessica Chastain), the daughter of his master. We hear from John that Miss Julie attempted to hang around with her servants including John during the barn dance, and he is still baffled by that rather peculiar behavior of hers.

When Miss Julie enters the kitchen, you can instantly see that this haughty but neurotic young woman is a walking trouble behind her aloof appearance. While she wants the abortion on her puppy which was recently impregnated by a dog of lesser breed, she blatantly flirts with the possibility of a breakaway from the class customs defining her world. Enjoying her privilege in front of John and Kathleen, she has some interest in a handsome valet ready to serve her, and John is not oblivious to that as following her instructions. 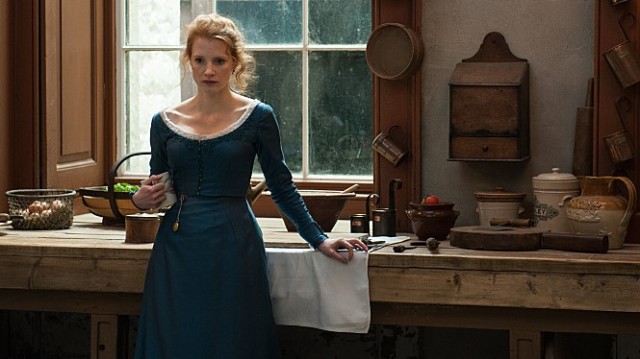 Although he is not so pleased by how he is treated by his mistress, it seems John also has certain feelings toward Miss Julie (his relationship with Kathleen is not that serious although they are technically engaged). As a self-educated man who went around many places before, John has his own hope and ambition. He wants to go up while she amuses herself with the potential of going down, and they soon come to sense more of mutual attraction between them when they get a chance to spend a brief time together outside the manor. He tells Miss Julie that he has had a fancy on her since he was young, and then she eventually finds herself crossing the line with John as a result.

It is clear that both characters are eager to break away from the environment in which they have been confined, and the director Liv Ullmann, who also adapted Strindberg’s screenplay for herself, constantly emphasizes the claustrophobic mood surrounding the characters in the film. Except a few outdoor scenes, the movie keeps itself mostly inside the house, and its isolated space seems to be occupied only by its three characters. Although frequently mentioned throughout the film, Miss Julie’s father never appears in the film, and we do not see any of other people in or around the house (In case of one moment when an excited bunch of people happen to gather outside the house, they are depicted only through sound effects).

Realizing the possible consequence of what they have done, Miss Julie and John try to deal with their difficult situation, but they only face their respective weakness. Once Miss Julie looks less special to him than before, John becomes very cruel and heartless to her as she gets herself tumbled down to a spot far lower than she has ever imagined. As painfully experiencing how helpless she is without the social power she has lost, Miss Julie continues to suffer her humiliating downfall, and then there comes an utterly despairing moment when she does not have many choices for getting out of her overwhelming circumstance which will surely destroy her in one way or another. 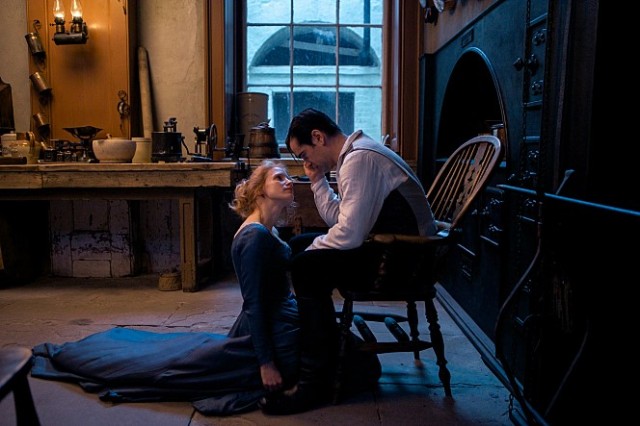 This is indeed uncomfortable to watch, and some of you will probably cringe at a number of emotionally brutal moments between its unlikable characters, but the performances keep holding our attention. Jessica Chastain, who has been as one of the most interesting American actresses since her sudden breakout in 2011, willingly hurls herself into high-strung melodramatic moments tricky to handle for any good performer, and she is crucial in making these moments genuinely hurtful and devastating. Miss Julie is not a very likable woman, but, thanks to Chastian’s splendid performance, we come to feel sorry for her downfall which is as tragic and pitiful as Blanche DuBois’.

On the opposite, Colin Farrell feels a little strained, but he ably goes between many different modes in his performance. While letting himself manipulated by his mistress, John has no qualms about being nasty and intimidating as fueled by his envy and ambition, and Farrell is gritty and aggressive as required in his emotionally violent scenes with Chastain. Samantha Morton looks wasted at first, but she gradually becomes another important part of the story, and she has her own moment with her cold, stern stare during a key scene around the finale. The hierarchy among the characters feels completely reversed in the resulting mess, and Morton is commanding as Kathleen solemnly and icily reminds of the other two characters of what they violated – and the price they will definitely pay for that.

Mostly known for her memorable performances in Ingmar Bergman’s films, Liv Ullman directed several films including “Faithless” (2000), which was made from Bergman’s screenplay. I lost some of my patience during the first hour of “Miss Julie” due to her plain but static direction, but Ullman knows how to draw effective performances from her small cast, and she mostly succeeds in capturing their performances well on the screen. The overall result is not entirely satisfying, but the movie is worthwhile to watch just for its cast members who did a good job of carrying their film well during 2 hours. 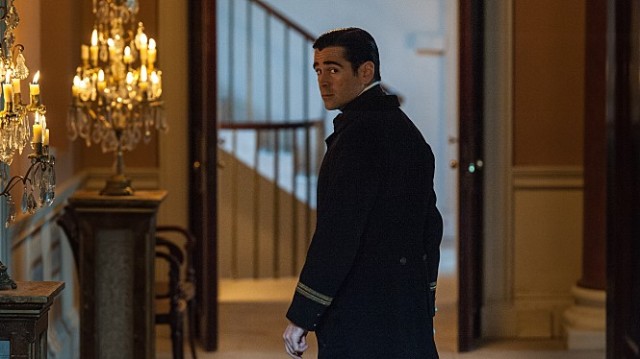 This entry was posted in Movies and tagged Class, Play. Bookmark the permalink.