With its own style and wit, “Guardians of the Galaxy” bounces around its space opera playground with its colorful outlaw characters who are always the constant source of surprise and amusement throughout the film. While it eventually arrives at the predictable third-act action climax just like any other recent comic book adaptations, this joyous entertainment is packed with infectious charm and zany energy to be savored, and we come to see lots of genuine humor and wonder inside its goofy plot while finding its main characters more endearing than before.

At the beginning, we are introduced to a young boy named Peter Quill(Wyatt Oleff), who is about to say goodbye to his dying mother at the hospital. Right after she gives him another cassette tape mix of songs as her final present(it is 1988, by the way), Quill’s mother dies before his eyes, and then Quill is suddenly taken away from the Earth by Yondu(Michael Rooker) and his alien outlaws called Ravagers.

After 26 years, Quill(now played by Chris Pratt in a leaner appearance with six-pack abs) becomes a small-time space thief who nicknames himself “Star-Lord”, and he finds himself in a serious trouble when he succeeds in stealing a mysterious orb on the planet Morag. While Yondu, who raised Quill with his gangs after his abduction rather than, according to his very own words, eating Quill, is not so pleased about that because his gang was supposed to get there first and puts a bounty on Quill, the orb in question, which looks like a bigger version of that smelly amulet from “Rosemary’s Baby”(1968), turns out to be a very powerful object wanted by others. Ronan(Lee Pace), your average megalomaniac villain not only eager for mass destruction but also hungry for the power to rule the universe, needs the orb to wipe out the people of planet Xandar, so he sends Gamora(Zoe Saldana), the stepdaughter of another big bad guy Thanos(Josh Brolin), to Xandar for tracking down Quill and taking away the orb from him. 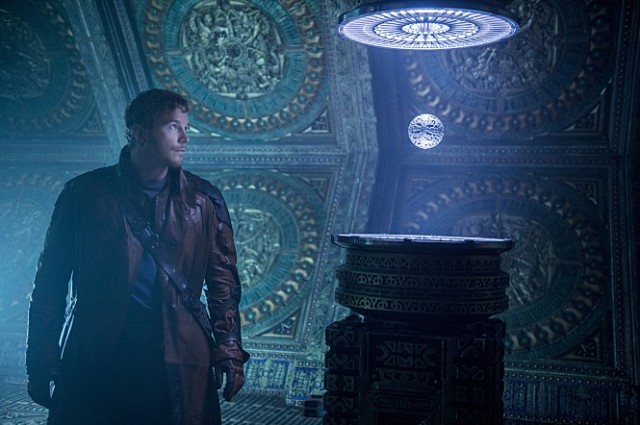 The things get complicated when a pair of bounty hunters also get involved in this circumstance. As soon as spotting Quill, Rocket(voiced by Bradley Cooper), a genetically engineered raccoon with considerable intelligence, and Groot(voiced by Vin Diesel), a big tree guy who is Rocket’s pet plant/partner, go after Quill like Gamora, and that results in a frantic chase sequence both exciting and hilarious to watch. All of them are eventually arrested and then sent to the space prison with maximum security, and, for escaping from the prison as soon as possible, they reluctantly form a temporal alliance along with Drax(Dave Bautista), a hulking muscular alien with lots of intricate red tattoos on his gray-skinned body.

There are many other things in the story, so you may be a bit confused as the screenplay by the director James Gunn and his co-screenplay writer Nicole Perlman is busy with juggling its many balls in the air, but the movie seldom loses its insouciant sense of fun. As the famous pop songs from the 1970s are occasionally played on the soundtrack to set its cheerful tone(I’d love to know how the hell Quill has kept his cassette tape and Walkman that fresh during 26 years, considering that he must have played the tape so many times to remember the Earth and his mom), the movie fills its delightful fantasy space with many visual details reminiscent of SF movies made during the 1970-80s. While there is a big metropolis which looks a lot like an upgraded version of the futuristic city shown in “Logan’s Run”(1976), we get a wondrous sight of a space mining colony in the middle of the picturesque space landscape decorated with stars and nebulae, and that surely recalls the romanticism of “Star Wars”(1977) and other SF fantasy movies. Usually speaking in English as if it were a galactic common language, the aliens in the movie are mostly in humanoid appearance, and some of them just look like us or Stan Lee while others are distinguished by various skin colors or other kinds of make-up on their body.

James Gunn, who began his career with B-horror movies produced by Troma Entertainment and then made a directorial debut with amusingly slimy(and disgusting) horror comedy film “Slither”(2006), frequently throws humorous moments into his movie even when the situation becomes more serious for his oddball characters, and most of them work although there are a few moments which look downright silly. It is apparent that his main actors have lots of fun with their characters, and the rapport between them is more effective and interesting than what we saw from the cast of “The Avengers”(2012).

Since I noticed him for the first time in TV sitcom “Parks and Recreation”, Chris Pratt has deftly been going back and forth between comic roles and dramatic roles in several films including “Zero Dark Thirty”(2012) and “The Lego Movie”(2014), and he brings a right mix of comedy and drama to his character. His jolly performance instantly wins our affection as Redbone’s “Come and Get Your Love” is played over his first scene, and you may overlook for a while Quill’s less pleasant aspects including his rather inconsiderate attitude toward many alien women in his wandering life(I guess Yondu and his feral gangs were not very good role models for Quill when he was young).

Pratt also has good chemistry with his co-star Zoe Saldana, and Saldana, whose greenish appearance will certainly take you back to her blue-skinned appearance in “Avatar”(2009), ably presents some soft spots inside her character’s toughness. Dave Bautista, who is naturally imposing as a former WWE wrestler, has his own funny moments as an alien character who is not so good at understanding metaphors, and Bradley Cooper and Vin Diesel inject extra fun into their respective scene-stealing CGI creatures who look convincing as real characters on the screen thanks to excellent special effects. Cooper imbues his raccoon character with amusing manic intensity, and Diesel somehow brings emotional nuances into the same words repeatedly uttered by his wooden character who has a few good tricks under his bark(“I am Groot”). The movie also has a number of notable actors; while Lee Pace, Djimon Hounsou, Karen Gillan, and Josh Brolin play thankless villain characters, Benicio Del Toro and Michael Rooker have juicy moments as more eccentric bad guys, and John C. Reilly and Glenn Close do their duty as the most sensible characters in the film.

Like others, I have observed the recent over-saturation of the blockbuster films based on comic books, and I already begin to feel tired of their increasing standardization. I did enjoy some of them, but there were not many new things to talk about in many cases, and that has frequently frustrated me. While it stays inside its genre conventions, “Guardians of the Galaxy” is a funny and witty comic book film with its own distinctive flavor, and I must confess that it entertained me more than any other recent Marvel Comics movies. I was excited, enchanted, and engrossed by its goodies, and I sincerely hope it will be able to keep its offbeat spirit well in the next stories to come.

This entry was posted in Movies and tagged action, Adventure, Fantasy, SF. Bookmark the permalink.