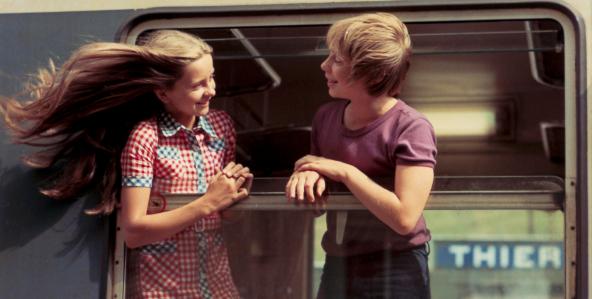 When I watched one film directed by François Truffaut for the first time during one Sunday afternoon of 2008, I had a little expectation about the movie, which was shown on TV as “Pocket Money”. Although I was already familiar with many of Truffaut’s famous works including “The 400 Blows”(1959) or “Day for Night”(1973), I had not heard about the title, and nor did I know that its alternative title in North America region was “Small Change”. Funny thing is, I remember that alternative title very well because Roger Ebert said in the introduction to the one part of his book “Awake in the Dark” that he still could not explain how he came to choose “Small Change” as the best film of 1976 instead of “Taxi Driver”(1976), which he placed on No.2 in the annual list.

While it goes without saying this cute little movie is not a masterpiece like the latter, you will find “Small Change” is a film heartwarming enough to induce such a misjudgment like that. Full of lively cute kids rolling around the series of humorous vignettes, the movie pleasantly moves and hangs around them with joy and care. Although it honestly recognizes that their world is not always bright and pleasant, the movie is ultimately sunny and hopeful, and it tells us that these lovable kids in one small French town will be probably all right in the end.

With no particular plot to push them, the movie observes their daily life at home and school during the last weeks of spring semester. We see a bunch of boisterous kids running along the streets for attending their school in the opening scene. We see them taught by their teacher in the classroom. He sees one of his students not listening to him, but, as a good educator, he finds an opportunity of teaching something to his students from what that boy was occupied with. And then the class is temporarily interrupted by the news about the teacher’s pregnant wife, and all the kids in the class are excited by whether the baby will be a boy or a girl while he is outside the classroom. 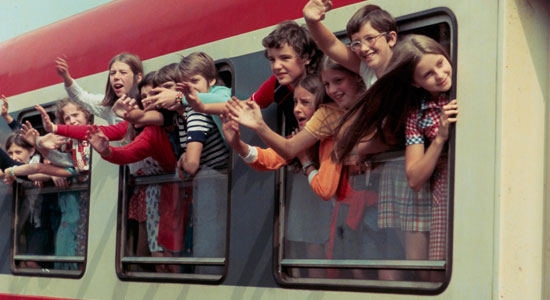 While encountering many kids appearing here and there on the screen, we get a little more acquainted with the relatively more notable ones among them. There are two mischievous brothers who try to earn some pocket money for them in their own hilarious ways. There is a boy whose life at home mainly revolves around his wheelchair-bound widower father. There is a little boy who really needs lots of attention from his mother due to his sheer unpredictability. There is a girl who gets a little friendlier with one of the boys at the school. And there is a poor boy who hides the harsh reality of his home life from his schoolmates while managing to attend the school.

The movie keeps serving us the memorable scenes to be remembered with smile throughout its running time. One of the funniest scenes(and also the scariest one if you are the parents with little kids) is when a little boy unwittingly puts himself in a serious peril when he tries to retrieve his kitten. Not aware of his circumstance, he innocently attempts to do a very dangerous stunt at the window of his home on the 10th floor, and the residents of the high-rise apartment building are helplessly watching him from below. I will not describe what will happen in detail, but let’s say I admire a lot how Truffaut effortlessly pulls a big hearty laugh from nail-biting suspense, and I still find this scene both terrifying and hilarious while confirming to myself that the child actor in the film was not put in danger during the shooting.

There is the scene featuring a girl left in the apartment by her parents just because she insists on taking her favorite handbag to the family dinner at the restaurant, and it made me chuckle a lot for its cheerful black comedy. She is pissed off, so she locks the front door and drops the key in her fish bowl, but she gets hungry as the time goes by. Her solution is direct and creative; using her dad’s bullhorn, she shouts to her neighbours in the apartment building that she is hungry, and then they help her in another amusingly creative way. If she were older, she would think for a while about how the neighbours will think about her parents after this funny happening, but that does not matter much to a girl at her age, especially when she is starving and the basketful of food(minus a bottle of wine thanks to one adult’s thoughtful intervention) is delivered right in front of her. 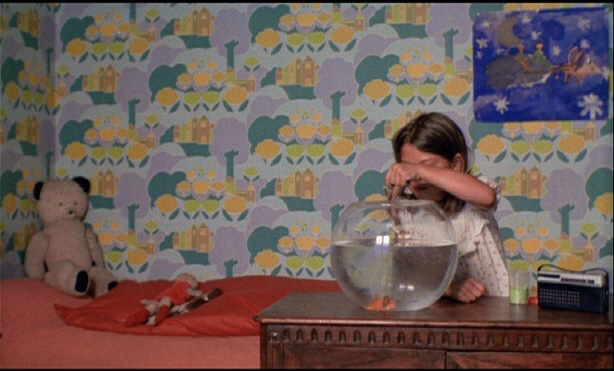 I found one funny moment at the classroom is far different from what I experienced at my elementary school mainly because I and most of my schoolmates usually answered well to our teachers, but I could see how dreadful it is when you cannot answer to the question thrown to you in the class. Around the end of the class, the teacher asks a question to one student. Nervously evading the teacher’s repeated question, he desperately looks at the clock outside the building. Two minutes, one minutes, 30 seconds… and he is finally saved by the bell signifying the end of the class to his relief.

These wonderful scenes and other good ones are separated from each other as the individual episodes, but we gradually see that they are making a bigger picture together in the end. The original screenplay by Truffaut and his co-writer Suzanne Schiffman was constantly changed on the set through improvisations, and the story freely goes around the characters without direction, but the movie somehow establishes the passage of their daily life amidst its various episodes. While we comfortably watch how the kids spend their days, the summer vacation is coming nearer to them, and their episodic experiences become the parts of themselves in the process. One episode is about a boy having the first crush in his life, and we later see him also realizing the impossibility of love for the first time in one painfully funny scene. Looking back at this scene, I wonder how much some of kids in my mother’s class felt miserable when they realized she was a married woman(one of them actually said he wanted to marry her – I am not kidding).

François Truffaut, one of the great directors emerging from the French New Wave, made his debut with “The 400 Blows”, which is a lot different from “Small Change” in many aspects. While the former is a painful coming-of-age drama, the latter is a gentle comedy/drama about children. But both of them look at their respective stories with transparent honesty; while you can sense the personal pain from his unhappy childhood in the former, you feel the avuncular love toward his little characters in the latter.

Truffaut was one of the few directors who really understand how children feel and think(no wonder he clicked well with Steven Spielberg on the set of “Close Encounters of the Third Kind”(1977)), and that quality of his is apparently shown through his deft handling of the child actors in the film. They are cute indeed, but, above all, they also come to us as the engaging characters thanks to the excellent natural performances pulled from the ensemble mostly consisting of non-professional child actors. When one of them tells to his friends about one vulgar joke he heard from somewhere, it is both funny and sweet because he just thinks it is funny without knowing why it is funny, and that takes me back to when I embarrassed my parents at one moment when I was 10. While we were in our car, I kept talking about what I read from the magazine article without fully understanding what the condom really is(I assumed it was some urinary equipment for males because the article was about determining the standard for how much water it must be able to contain without being broken).

The movie becomes a little too heavy-handed near the ending when it turns out that one of the kids in the school has been suffering from the domestic abuse. After that incident, the teacher gives a long speech to his students on the last day of the semester, and, when he talks about children’s right and how they should be treated, it is blatantly clear that he speaks directly to us as Truffaut’s mouthpiece. Although I do not wholly agree with some points made by him, I also understand that this flawed speech comes from Truffaut’s sincere heart really caring about children. As a man who once struggled through difficult childhood, Truffaut gives a good pep talk to the children through the teacher’s speech: “Some of us who’ve had a difficult childhood are better equipped for adult life than the ones who are overprotected with love – it’s the law of compensation.”

While showing the concern toward the children who will face the hard facts of life while growing up, the movie also expresses the optimism about their future. When the teacher talks about his concern over the dinner with his pregnant wife at his home, she tells his husband one undeniable fact about kids; “Kids are as solid as rock. They stumble through life, but they’re not hurt. They are much tougher than we are.” Though they are the most vulnerable individuals in the society, most of them will move on while growing up. And maybe some of them will find themselves giving the similar speech to the children at the opposite end while hoping for the best like their teacher once did.

“Small Change” is one of the best films about children – and it is also one of the most charming ones. When the movie arrives at the end credit after another funny incident, we are treated with one marvelous sight filling up the whole screen. I was touched by the immense affection inside it when I saw it for the first time, and I again found it lovely during the recent revisit. I am sure your heart will be also melted by it, too.

This entry was posted in Movies and tagged Children, Domestic Violence, School, Teacher. Bookmark the permalink.