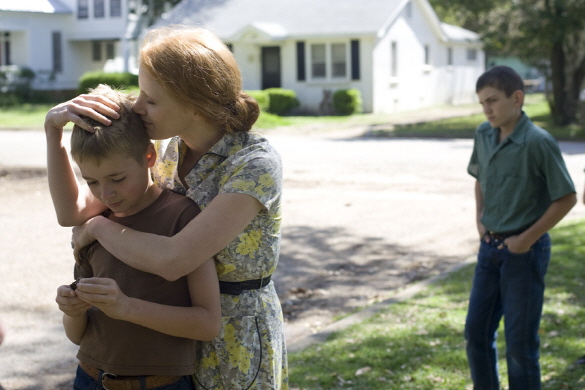 “The Tree of Life”, Terrence Malick’s ambitious new film, is a dazzling kaleidoscopic panorama rare to watch. Sometimes it seems ponderous, and sometimes it feels bloated, but it is an overwhelming visual feast to be remembered and discussed. I cannot explain to you everything in the film but, while watching it, I could feel that it is musing on the universe we live in as well as our life on the earth. Its utmost seriousness may bore you at first, but it regards its two main subjects equally in its solemn but deeply humane view, and the resulting juxtaposition is nothing short of stunning. Our life is surely far smaller than the whole universe still expanding even at present, but it reminds us that our life is a small universe as wondrous as the vast world of time and space encompassing it.

The movie is serious about what it intends to meditate on. We see the flickering lights on the screen in the opening scene. What is it? I know it is not the Big Bang, but the quote from the Book of Job preceding this scene somehow made me think about it: “Where were you when I laid the earth’s foundation … while the morning stars sang together and all the sons of God shouted for joy?”

After introducing the main characters, the movie sweeps us across the passage of time on the Earth from the beginning. The sun is born. The early solar system is organized. The earth is born along with its other fellow planets. The young earth is convulsed with volcanic activities. The sea and the land we know are made. The evolution of life forms is commenced in the sea. We soon see the dinosaurs in the forest. We know they are CGIs, and we can laugh over that, but the director Terrence Malick adds an interesting touch. A dinosaur lies dying near the river. The predator dinosaur approaches to it. When it is ready to kill and eat its prey as its nature demands, it regards the dying dinosaur for a moment – what does it think?

At the center of such a huge, ambitious canvass, there is a small life on the Earth sprawling before our eyes. When we meet Jack(Sean Penn) at present, he seems to be a successful architecture working in some anonymous city. While we do not get to know much about him, his current life is well represented by the sterile environment surrounding him. After having some conversation with his father on the phone, he starts to contemplate on lots of things through his musing narration, including God, the world, and, above all, the fragmental memories from his early life, including the suicide of his younger brother which left his parents quite devastated at that time.

The movie freely moves around the memories from Jack’s adolescent years in a non-chronological stream-of-consciousness narrative. Young Jack, played by Hunter McCracken with a good natural performance, grew up with his two younger brothers under his ordinary parents in the neighborhood somewhere in the Midland around the 1950s, realistically created by Malick’s usual collaborator Jack Fisk, filled with small details.

As the narration implies, Jack’s parents are contrasting figures in his life as ‘nature’ and ‘grace’. His father(Brad Pitt) is a stern guy who can be a nice father but also can be a harsh man to his three sons. He tries to teach them about the world outside unfair to him, but that only makes him no more than a tyrant in their eyes. In contrast, his mother(Jessica Chastain) is a kind and generous woman who express the love to her boys more openly. In the religious viewpoint of the movie, their contrast is naturally connected with the contradicting image of Christian God, who gives life with grace and then takes them away according to the merciless law of the nature he makes. Pitt is good as a plain flawed man with an unfulfilled dream who loves his sons in a rather misguiding way. Chastain is radiant as a gentle soul who embraces them without condition. 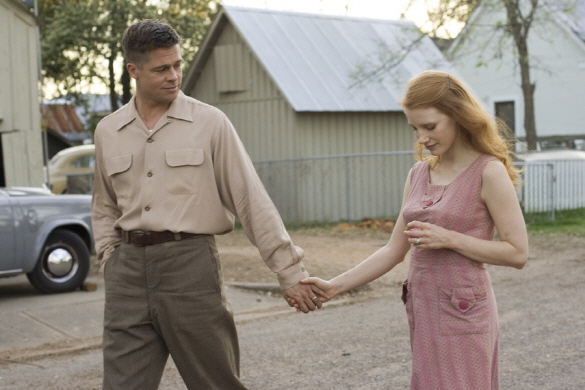 There is not much of a story in conventional sense in the film, whose main synopsis is easily summed up as how Jack and his younger brothers spent their idle time together when they were young on those bright summer days. They run around the field with their dogs. They swim in the pool with other kids. They climb on a tree in their neighborhood. They hang around with other kids. They have joyful times with their mom at home when their father is not at home. Even when you get lost in the maze of Jack’s memory(maybe you will ask yourself which of Jack’s brothers would suicide while watching the movie), there are lots of small, emotional scenes filled with beauty and intimacy. You may probably remember how comfortable it was to have someone who will turn the light off after you were asleep. Or, have you ever enthusiastically followed a truck spewing the disinfectant gas from its behind? I did and I loved to do that(By the way, I grew up in the 1990s, so, unlike the 1950s, they did not use DDT).

Compared to this part, the strongest and most powerful one in the film, the rest of the film feels somewhat redundant at times when it attempts to be grand. None the less, like Malick’s few but memorable films, the movie remains as an absorbing viewing experience flowing and scanning around the images lingered on your mind. No matter how you think about that long interlude about the history of the Earth, the comeback work by the special effect master Douglas Trumbull, famous for his work in Stanley Kubrick’s “2001: A Space Odyssey”(1968) and other notable SF movies, is spectacular to watch. Emmanuel Lubezki’s dynamic cinematography is always captivating, whether it shows the nature or the people or the objects. Even in the scenes of adult Jack, Lubezki imbues the cold modern buildings with certain awe not that different from how I looked at the modern skyscrapers of Chicago through my small digital camera during last spring. 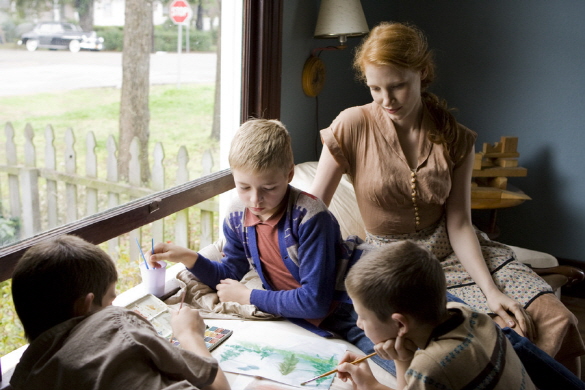 Like “2001”, its soundtrack is impressive; the diverse collections of the classic pieces by Brahms, Bach, Mahler, and other composers fills the soundtrack along with Alexandre Desplat’s restrained score in the film. While they might not leave the impression as striking as Kubrick’s movie, they certainly add considerable extra power to several important scenes in the film.

Honestly, I am still debating with myself about how I can more accurately describe “The Tree of Life”. I am still at a loss about what exactly it tries to say or express to me and other audiences. But I can say without any doubt that “The Tree of Life” is one of those awe-inspiring movies I will gladly visit it again. It tries to look widely at the big picture while focusing closely at the small spots in it. It may aim too high, but the movie nearly accomplishes its challenging task, and the result is a moving, exceptional piece of work. After the movie ended, I discussed with others about the film for more than 10 minutes and we agreed on one thing; even if you don’t understand it, it will grow on you as something special.

This entry was posted in Movies and tagged Death, Dinosaur, Drama, Father and son, Life, Mother and Son, Religion. Bookmark the permalink.