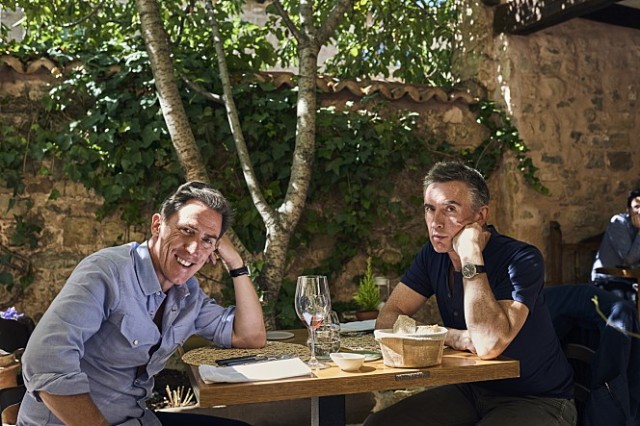 “The Trip to Spain” is as fun and amusing as I expected, and that is fine with me. Like two previous films “The Trip” (2011) and “The Trip to Italy” (2014), the movie constantly draws lots of small laughs from the humorous interactions between its two funny and engaging leading performers, and it surely helps that these entertaining moments are accompanied with numerous lovely sights of beautiful locations and tasty restaurant dishes.

Like two previous films, the movie begins with Steve Coogan calling his friend/colleague Rob Brydon. They are going to have a trip together in Spain for restaurant review article, and their travel schedule is pretty much same as before. As they did in “The Trip” and “The Trip to Italy”, they are going to travel around here and there during six days for dropping by several good restaurants, and they both expect that it will be another nice excursion for them.

After Coogan comes to Brydon’s residence for picking him up, they soon get on a ferry ship to Spain, and then they arrive in their first destination on the next day. As they begin to enjoy the dishes of a restaurant located there, they begin to hurl verbal jabs to each other as usual, and I was impressed again by how effortless Coogan and Brydon are in their fluid and dynamic interactions on the screen. I really have no idea on how much they actually improvised on the set or how much they really projected themselves into the movie, but I can say at least that they are indubitably talented and interesting people to watch, and I can easily imagine them doing something equivalent to “My Dinner with Andre” (1981) for hours.

Their conversations are mostly lightweight compared to that long philosophical conversation in “My Dinner with Andre”, but Coogan and Brydon know how to amuse and entertain us, and I chuckled as watching them trying voice imitation as they did in the two previous films. While the first moment of voice imitation in the film instantly took me back to when they try to imitate Michael Caine’s voice in “The Trip”, they also try to imitate the voices of several other famous figures throughout the film, and my personal favorite moment is when Brydon relentlessly imitates Roger Moore’s voice to the amusement of everybody on the table except Coogan.

Meanwhile, the mood gradually becomes more serious as time goes by. Although frequently boasting of his considerable success with Oscar-nominated film “Philomena” (2013), Coogan feels insecure as his next project, which seems to be another Oscar season movie just like “Philomena”, is not greenlit yet without much progress, and it also looks like he is no longer ‘up-and-coming’ at present. While he has accepted that, as reflected by one brief amusing scene set in La Mancha, he is akin to Sancho Panza whenever he is with Coogan, Brydon later gets a call from Coogan’s former agent, and it looks like he may get career boost he has always wished.

In the meantime, they continue to go around here and there, and we look around several wonderful historical places along with them. I particularly enjoyed the interior of an old church which also owns a very early copy of Shakespeare plays, and that leads to another funny moment between Coogan and Brydon. When they come to Grenada, we see a number of old architectures which clearly show their cultural significance, and we are accordingly served with a conversation revolving around the history of Granada.

Still, Coogan and Brydon are the center of the movie, and their enjoyable comic performance here in the movie reminds me again of how dependable they have been during recent years. Although he did not impress me much when he appeared “Around the World in 80 Days” (2004), Coogan has given a number of commendable comic performances since that point, and he and Brydon were simply priceless as the comic duo of “Tristram Shandy: A Cock and Bull Story” (2006), an overlooked comic gem which did a nearly impossible job of adapting Laurence Sterne’s amusingly infamous classic novel “The Life and Opinions of Tristram Shandy, Gentleman”. After “The Trip” and “The Trip to Italy”, they are certainly accustomed a lot to their respective roles, but they keep digging something new and fresh from their usual shticks, and that is, I dare to say, a lot more enjoyable than those repetitive Hollywood blockbuster sequels out there.

Overall, “The Trip to Italy” is more or less than what we saw from its two previous films, but Coogan, Brydon, and their director Michael Winterbottom, who previously collaborated with his two actors in not only “The Trip” and “The Trip to Italy” but also “Tristram Shandy: A Cock and Bull Story”, did their job well again, and I am willing to see whatever will come next from them. Considering how its rather long epilogue scene ends, there may be another installment, so now I wonder: will they try South Korea someday? 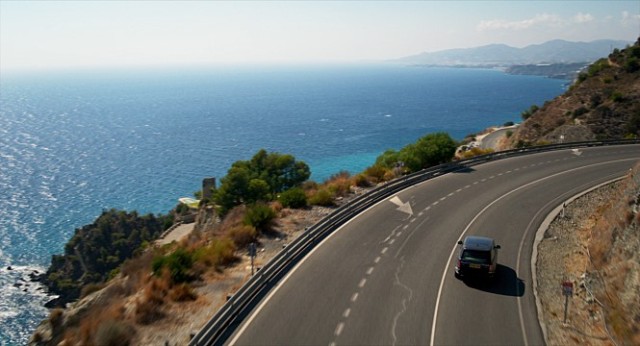 This entry was posted in Movies and tagged Comedy, Food, Travel. Bookmark the permalink.