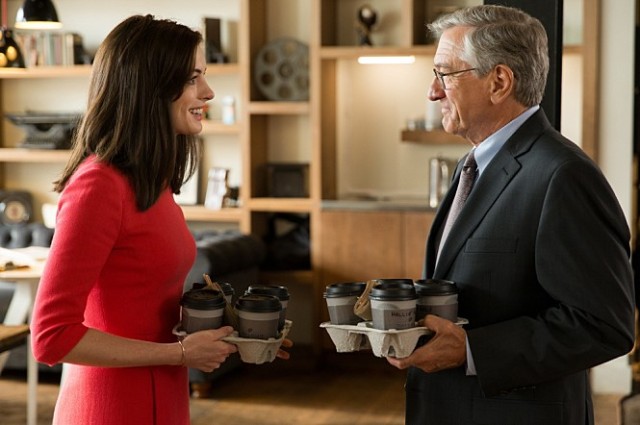 “The Intern” is often warm and humorous, but I was constantly moving my judgement back and forth during my viewing. It goes without saying that its two talented lead performers are too good for the film, but I kept noticing how engaging they are as the human characters who deserve a better story with more edges and wits. The movie is not that good, but you may nearly forgive its flaws just because of how its lead performers diligently support it with each own star presence.

The movie begins with one of its two lead characters talking about his life during recent years. Ben Whitaker (Robert De Niro) is a retired phone book company executive entering the 70s, and we hear about how he has been spending his affluent retirement life which may make you wonder how much he actually earned during his work years. While his son happily settles in Seattle with his own family, Ben has lived alone in his posh upper middle-class house since his wife’s death, so he has tried several new things to enliven his rather uneventful daily life, but he still does not feel satisfied enough while looking for something more challenging to stimulate him.

On one day, Ben comes across the notice on the senior internship program of a rising e-commerce fashion company named About the Fit. While he has to learn several more things about the digital age he is not wholly familiar with, he soon makes a nice digital video file for his application, and he does not have much problem as going through a couple of interviews. He eventually begins to work at the company, and he is assigned to Jules Ostin (Anne Hathaway), the young founder/CEO of the company who is not that interested in her company’s special internship program intended as a community outreach for its Brooklyn neighbourhood.

Still amazed by how the Brooklyn neighbourhood he knew for many years has been rapidly gentrified, Ben gradually adapts himself to his new work environment. He may be an old-fashioned guy who still wears a tidy business suit at his work and also has to learn lots of things for working at an e-commerce company, but he knows a lot about how to handle small and big matters in the company as a resourceful man with experiences. Not so surprisingly, he quickly becomes everyone’s favorite employee in the company.

In case of Jules, it takes some time for her to see her new intern’s value because, well, she is constantly busy with her demanding business while facing a difficult moment of choice. Her investors recently suggest that she should bring in a more experienced CEO for the future of her expanding company, but she does not like the idea of someone else taking over the control of the company she is very proud of. She wants to keep running it as before, but she also knows well how frequently she has been absent to her young daughter Paige (Jojo Kushner), who has been taken care of by her generous husband Matt (Anders Holm) since he gave up his own career for his wife’s.

As Ben assists Jules in indirect or direct ways, he naturally becomes a valuable friend and adviser for her, and there is a nice moment when they happen to work alone in the office during one evening. As they have a private conversation accompanied with pizza, Jules comes to respect Ben more than before for his life experiences, and Ben equally admires Jules for how much she has accomplished even though she has just entered her 30s.

And it certainly helps that they are played by two very watchable actors. Although he is already past his prime period when he used to astound us with his great performances, Robert De Niro still can hold our attention as one of the best actors from his generation, and he wisely dials down his usual intensity for the role which could have gone to Dustin Hoffman. I think Hoffman could have been more effortless because he can play an ordinary guy more believably than De Niro, but De Niro is not bad in his dependable performance, and he has a number of good moments when his character subtly handles others around him while maintaining his humble position as usual. 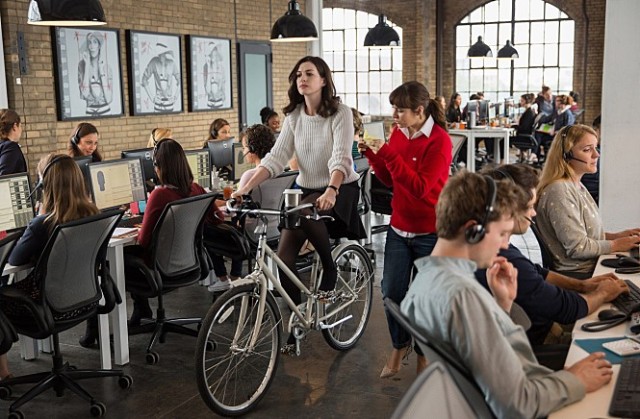 In the opposite, Anne Hathaway gives a sunny, charming performance to balance De Niro’s low-key acting, though her character is ridden with those usual clichés we can expect from a working mother conflicted between work and family. While Jules’s strained relationship with her husband is the least convincing thing in the film, the movie curiously stays away from Jules’s meetings with possible CEO candidates, and how it eventually resolves these problems of hers in the end is too easy and safe to say the least.

The supporting performers surrounding De Niro and Hathaway do not have many things to do except providing occasional laughs from time to time. While Andrew Rannells is Jules’ sassy right-hand guy, Adam DeVine, Zack Pearlman, and Jason Orley are a trio of goofy office workers who come to assist Ben during one silly sequence involved with their attempt to break into a certain suburban house, and Rene Russo, who was excellent in her supporting turn in “Nightcrawler” (2014), is under-utilized as an office masseuse who gives Ben something he will not easily forget.

Since her Best Screenplay Oscar nomination for “Private Benjamin” (1980), the director/writer Nancy Myers has steadily written or directed notable lightweight comedy films for many years. I enjoyed those hilarious moments of “Something’s Gotta Give” (2003), but I was merely amused at times by “It’s Complicated” (2009), and “The Intern” is somewhere between them. It is not entirely bad thanks to De Niro and Hathaway, but, overall, this is a mild comedy film without much impression left behind it. 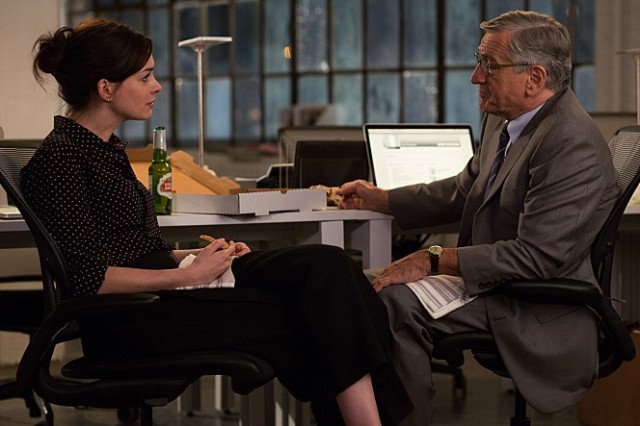 This entry was posted in Movies and tagged Business, CEO, Husband and Wife, Intern. Bookmark the permalink.