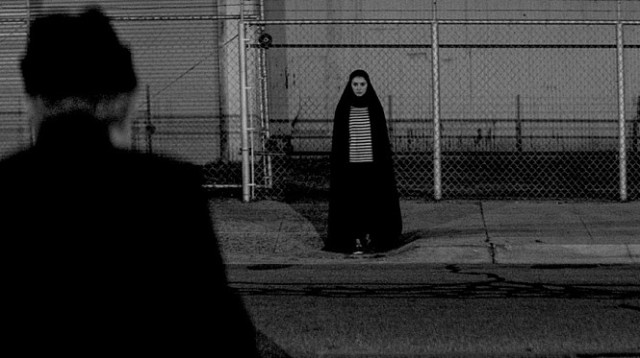 While injecting some fresh blood into its genre conventions, “A Girl Walks Home Alone at Night” wanders around its strange and familiar world filled with bleak beauty and ominous aura. As an eerie and melancholic vampire tale set in some Iranian City, this small independent film attempts an interesting variation of horror genre, and it shines darkly with its own distinctive mood and personality while evoking the barren feeling of despair and loneliness surrounding its characters.

They live in a city called Bad City, and they sometimes look like only denizens of their city when they are walking around its deserted streets and alleys. Arash (Arash Marandi), a young man whose attire and hair style are clearly influenced by James Dean and other young American movie rebels from the 1950s, is living with his junkie father Hossein (Marshall Manesh), and he recently has a trouble with a local drug dealer named Saeed (Dominic Rains). Saeed demands Arash to pay off Hossein’s debt, and he eventually takes away Arash’s precious Ford Thunderbird instead of money.

Saeed also works as a pimp, and we see his cruel treatment of Atti (Mozhan Marnò), an aging prostitute who has already passed her prime but still tries to earn money on the streets. While Saeed forces her to do a usual service on him in his newly acquired car, it turns out that there is someone watching this from the distance, and that mysterious figure is quickly disappeared as soon as Saeed happens to notice it.

While she does not reveal much about herself except her dark nature, we see more of how The Girl (Sheila Vand, who previously played a small but crucial supporting character in “Argo” (2012)) spends her nights. Usually wearing a black chador, she drifts around night streets without getting noticed much by others, and, whenever she comes across a man bad or mean enough for her bloodsucking, she is ready to reveal her sharp fangs behind her enigmatic but attractive face. When she suddenly appears behind his back, Saeed thinks she is an easy prey, but the table are soon turned when he tries to seduce and dominate her at his luxurious house.

Considering the social repression on women often glimpsed from the movie, it can be interpreted that she is an avenging angel of darkness for that injustice we usually observe from male-dominant societies. That intriguing aspect is subtly implied through not only her brief private conversation with Atti but also her creepy admonition on a young boy who will probably never forget her stern words even after entering adulthood. There is also a memorable moment when she rides a skateboard along the empty night street, and you will notice how her chador flutters as if it were her wings.

And then she finds herself attracted to Arash, who happens to come across her after his dizzy party night involved with alcohol and drug. Because it was a costume party, he dressed himself up as Count Dracula, and we cannot help but amused by a funny irony when he introduces himself as a vampire to her while still feeling confused in his intoxicated state. There is the possibility of romance between them, and that leads to a quiet but lovely moment when she invites Arash to her home. While they do not talk much, the mood is slowly built up with a pop song played from her LP player and a disco ball reflecting lights above them. As the camera calmly observes them in static position, they slowly approach to each other, and they feel good to be close to each other – even when Arash’s bare neck is right in front of her.

The director/writer Ana Lily Amirpour did a commendable job of presenting a stylized world envisioned by her (this is her first feature film, by the way). While the movie was actually shot around a small town in California, her actors, who are mostly expatriate Iranians, deliver their lines in Persian, and we sort of accept their characters’ world thanks to the good use of locations under Amirpour’s confident direction. 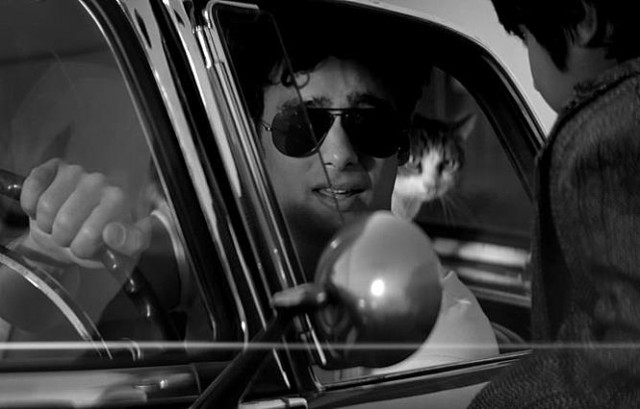 Gorgeously shot in black and white film by the cinematographer Lyle Vincent, the movie is dripping with moody and languid ambience in its every shot, and it is instantly compared with Jim Jarmusch’s recent film “Only Lovers Left Alive” (2013), which is also a vampire tale with heavy emphasis on style and atmosphere. Consisting of a number of Iranian pop songs and other kinds of pop music, the eclectic soundtrack of the film works as an effective accompaniment to several key scenes, and its rumbling industrial sound effects further emphasize the feeling of alienation along with the frequent shots of factories and oil pumps.

The characters in the movie are simple and broad, but they are vivid caricatures while some of them are as memorable as its vampire heroine. Dominic Rains gives a colorful supporting performance covered with many different tattoos as a despicable guy who richly deserves what he gets in the end, and Mozhan Marnò and Marshall Manesh are also excellent as pitiful characters at the bottom of each own despair.

As an elusive vampire girl capable of both ruthlessness and compassion, Sheila Vand is the ambiguous but compelling center of the film, and she and her co-actor Arash Marandi have a nice low-key chemistry between them. They are fabulous in another intimate scene where their characters confirm their mutual affection to each other, and then there is a poignant wordless scene later in the story when everything is very clear to both characters even though nothing is directly exchanged between them (The special mention must go to a cat named Masuka, who steals the show whenever he appears).

As a film relying more on atmosphere than narrative, “A Girl Walks Home Alone at Night” requires a certain degree of patience due to its slow pace and sparse plot, but the movie is an impressive exercise in style and mood with new interesting elements for its genre. We were once quite depressed by those toothless Twilight films, but then there have been several good vampire movies like this to our delight, and I guess we can be relieved for now. 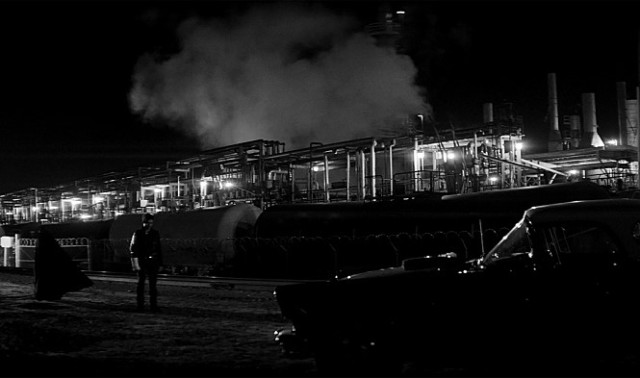 This entry was posted in Movies and tagged Horror, Romance, Vampire. Bookmark the permalink.