There is always the lagging phase in wars unless they end quickly. The soldiers on the both sides are tired and exhausted day by day. They doubt whether they can eventually survive or not. And it seems their hardship will last forever. Even so, when the fateful moment comes to them again, they have no choice; they do what their survival instinct drives them to do, and there are another scar and pain to be stored in their hurt lockers.

South Korean war movie “The Front Line” presents us the last chapter of Korean war, which was less dramatic than its major events but was far more frustrating to the people on the battlefield. When North Korea invaded on the 25th of June in 1950, North Koreans were confident that they would win within a month. However, the situation was soon reversed when the allied force of South Korea, US, and UN pushed the North Korean army to near North Korea-China border. And then China participated in the war in January 1951, so the allied force retreated to the south, and then they counterattacked again to push North Korea and China to the north. Soon, both sides arrived at stalemate with the front line that divided the country half as before the war.

That situation lasted for nearly two years until they finally signed a truce agreement in July 1953. While the top brasses were negotiating for a truce in Panmunjum, ironically, the soldiers on the front line kept fighting to defend or recapture the areas as if they were in endless extension game. In one amusing montage in the film, North Korean soldiers take over a hill on one day, and then they are chased away by South Korean soldiers on the other day, and then North Koreans take it over again. That has happened so many times that one character cynically says he even cannot remember how many times they took over the hill, which is becoming more like a mass mound.

Its name is Aerok hill, and the Alligator Company of South Korean army has fought with the opponent over that hill at all cost. Recently, the company commander dies in a rather suspicious circumstance(he was shot by a gun from his company – don’t ask me how they came to know that in that busy situation), and Eun-pyo(Sin Ha-gyoon), a lieutenant from the counter-intelligence department, is assigned to surreptitiously investigate this incident. Besides this suspicious death, somebody is sending the letters from North Korean soldiers to their family in South Korea, so his superior thinks there must be a spy(or spies) in the company. 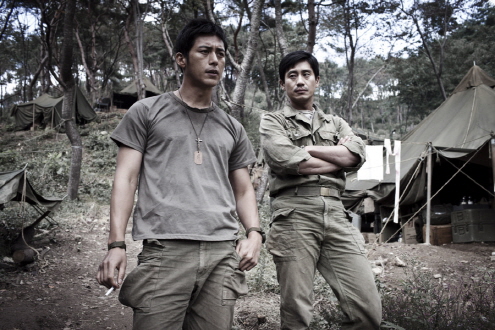 Before arriving with the new company commander and a young private, Eun-pyo comes to know that his friend/comrade, Soo-hyeok(Ko Soo), who was taken by North Koreans when they fought together at the start of the war, is alive well in the company. While it is never explained well about what Soo-hyeok had to go through to return to his army, Ko Soo ably suggests the transformation process inflicted on his character with the intense performance.

While not so surprised to see that his friend is changed, Eun-pyo senses there is something awkward about the soldiers of the Alligator Company. The company is led by Il-young(Lee Je-hoon), a boyish captain who is an experienced soldier but is far younger than the soldiers under his command. It can be said that the real leader is Soo-hyeok, but he and others really respect Il-young’s commanding position and there are apparent comradeship among them. None the less, there exist the things they do not want to openly talk about in the air – is it possible that their secrets are connected to the death of their former commander?

But, even before the half of the running time is passed, we come to realize is that question is sort of MacGuffin to pull us to something deeper than ‘murder mystery’. There are indeed secrets, but they are revealed earlier than we expected, and they give us the insights on the extraordinary human conditions caused by war. The soldiers on both sides fight like hell when they have to, but, while conflicting with each other for a long time, they form the strange, complex relationship only possible in war. Even after so much violence between them, there is enough humanity left in them to show some mercy to each other indirectly they can afford – while never forgetting their duty. 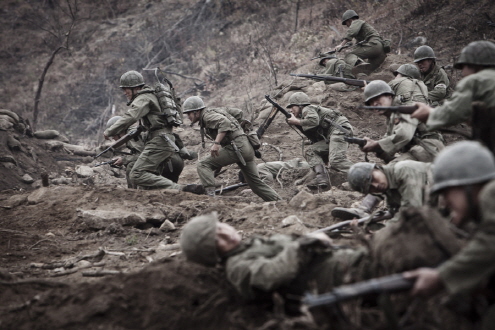 The screenplay is written by Park Sang-yeon, who wrote the novel “DMZ”, which Park Chan-wook’s “Joint Security Area”(2000) was based on. It is also about an unlikely relationship between South and North Koreans soldiers in Panmunjom, and, in that case, the story is milder and more sentimental – probably because, despite everything that has happened during last 60 years, North and South Korea have learned a contradictory way of getting along with each other while still conflicting with each other. Lately, we have another headache due to North Korea, but, again, after the tension was considerably increased, the situation is getting less tight now.

The director Jang Hoon successfully makes a solid war movie. The battlefield scenes are dirty, bloody, chaotic, exhausting, and dynamic while holding our attentions on the ground. At first, with quick cuts and handheld camera, the movie gives the typically disorienting atmosphere of battlefield we have been accustomed to since “Saving Private Ryan“(1998), and then it begins to look at the battle scenes with smooth, steady camera move with the confident direction as if we ourselves were getting used to what’s happening around the characters. Jang Hoon does not lose human dimensions amidst lots of explosions; reminiscent of that famous battlefield sequence in “Path of Glory”(1957), every step forward is really hard for the soldiers shown on the screen.

The people in the film are the standard stock characters we have met countless times before in war movies, but Jang Hoon has the wonderful cast to make these clichés, as a group, the life force of the story. The murder mystery gets less important as the plot progresses – their daily struggles are more compelling element to drive the plot.

As the lead performers, Sin Ha-gyoon and Ko Soo admirably carry the film while complementing each other. The best thing they do in their movie is that they allow lots of space for the superb supporting ensemble. While we have such reliable veterans like Ryoo Seung-Soo, Ko Chang-seok, and Ryoo Seung-young, it is also terrific to watch young actors like Lee Je-hoon or Kim Da-wit(He was Yun Jung-hee’s reckless grandson in Lee Chang-dong’s “Poetry”(2010)) hold their place among their seniors. When these actors and others are together as the company soldiers, the bond between them is palpable – you instantly accept them as the band of brothers right from the beginning. 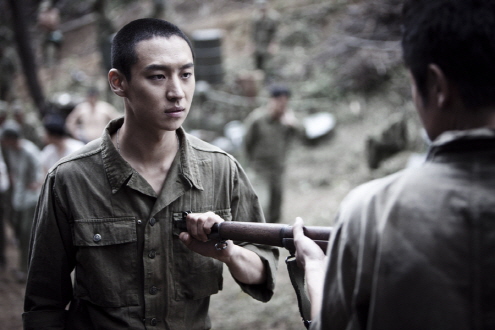 All are uniformly good. Lee Je-hoon, who was memorable as one of the teenager characters in “Bleak Night”(2010) in this year, gives the best performance as the young captain who rigidly hides the memory of an impossible situation in his past. What he chose to do was quite horrible as shown in the flashback sequence, but who can blame him? The survival is always more important than anything else in war, and he did what should be done for saving him and others – but not all of them. Ko Chang-seok, who appeared in two previous works by Jane Hoon, steals the show again with his likability as an old-timer who has accepted war as the part of his life for quite a long time. Ryoo Seung-young and other performers accompanying him bring the human side to their North Korean characters, and Kim Ok-bin, who plays only crucial female character in the story, also gives a short but impressive supporting performance.

With so many good things in its bag, “The Front Line” could have been one of the best South Korean movies of this year, but it is unfortunately marred by its third act which is too long and unnecessarily preaches to the choir. Though 1) it is not a fatal flaw, 2) the movie does not entirely lose its grip on us, and 3) it has a point about how horrifically and absurdly meaningless it was to push the soldiers to the certain death only for pushing the military demarcation forward a little more even when war will officially end within less than 24 hours, I cannot deny that the movie lags significantly compared to its first 1.5 hour at this point.

I agree with several South Korean critics that it could have been a lot better if its lagging third act had been trimmed a bit. However, the movie is still powerful enough to be recommended; I give it 3 stars due to my trivial reservation at this point, but it may be the best Korean War movie among the ones we’ve seen in the last decade. War is surely hell or hellish purgatory, and here is a good war movie which really shows that universal truth without ostentation from the painful chapter of South Korean modern history.

This entry was posted in Movies and tagged Korean War, Murder, War. Bookmark the permalink.