South Korean film “A Haunting Hitchhike” is the gloomy story of a young teenage girl struggling with harsh aspects of her unkind world. She simply hopes that things will get better for her, but she only finds herself facing more troubles on her way, and it is often poignant to see how she manages to maintain her dignity and strength although life still remains hard and difficult for her even at the end of the story.

In the beginning, we meet Jung-ae (Roh Jeong-eui), and we get a brief glimpse into her shabby daily life. Since her mother and sister left them some time ago, she and her father Young-ho (Kim Hak-sun) have lived alone in a poor neighborhood located somewhere in Seoul, but, as revealed later in the story, Young-ho has been terminally ill due to cancer, and there is not anyone to help them, though she has recently received several formal letters notifying her of where her mother is at present.

Meanwhile, Jung-ae’s school friend Hyo-jung (Kim Go-eun) came to know more about her father who left her and her mother when she was very young. Because the rural area where he seems to reside now happens to be near the place where Jung-ae’s mother is supposed to be staying, Hyo-jung and Jung-ae decide to take a trip together on one day, but they soon find themselves at the dead end shortly after arriving in that rural area, and then they get themselves into a possibly dangerous circumstance.

Fortunately, Jung-ae and Hyo-jung manage to save themselves in the end, and we subsequently see them being questioned by a couple of local cops at a local hospital. When one of these two cops shows his badge, Jung-ae notices that his name is identical to the name of Hyo-jung’s father, and she becomes more curious about that cop as he allows her to stay at his house for one night.

After Jung-ae eventually returns to her home, the situation keeps getting worse for her and her father. As he becomes far sicker than before, his doctor recommends more therapy, but neither Young-ho nor Jung-ae has insurance to cover the considerable cost of his cancer treatment, and he also gets fired from his menial job due to his illness. While fully accepting his approaching death, Young-ho only hopes that his daughter will be okay after he is gone, but then he cannot help but become quite frustrated when he comes to learn that they cannot be on welfare for a rather trivial reason.

With some assistance from Hyo-jung, Jung-ae tries to get any kind of help. At one point, she and Hyo-jung go to a small apartment belonging to someone Jung-ae knows, but, not so surprisingly, they soon receive a harsh response from that figure in question. When she subsequently goes to a place where her mother is supposed to stay, she receives another bad news, and that makes her more disappointed and frustrated than before.

Later in the story, Jung-ae comes to approach to that aforementioned cop because she had a brief moment of comfort and happiness at his place, but she is not totally honest with him, and it soon turns out that the cop and his family have their own trouble to deal with. The cop has a son, but he is angry about his son having been involved with some religious group, and the mood becomes quite awkward and tense when the cop and Jung-ae happen to have a dinner along with his son.

Although the story takes a sudden melodramatic turn during its last act, the movie keeps maintaining its calm, detached attitude while letting us more emotionally involved in Jung-ae’s increasingly depressing circumstance, and we are served with several quiet but powerful moments to remember. There is an infuriating scene where Jung-ae is unfairly treated by the police for a certain incident involved with her father, and then there is also a small touching moment showing Jung-ae and Hyo-jung reconfirming their friendship to each other.

Above all, the movie exemplifies well considerable talent of Roh Jeong-eui, who previously drew my attention via her scene-stealing supporting turn in “Phantom Detective” (2016). Deftly balancing her character well between vulnerability and resilience, Roh steadily holds our attention from the beginning to the end, and she is particularly good whenever she wordlessly conveys to us whatever is churning behind her character’s weary façade. In case of a few supporting performers around her, Park Hee-soon and Kim Hak-sun are solid in their respective supporting roles, and Kim Go-eun holds her own small spot well during her several scenes with Roh.

“A Haunting Hitchhike”, which was shown at the Busan International Film Festival in 2017 but was belatedly released in South Korea a few months ago, is the first feature film by director/writer Jeong Hee-Jae. Although I must point out that there have been many other gloomy South Korean independent films trying to present a hard realistic slice of life, her movie distinguishes itself via not only its sensitive storytelling but also its commendable lead performance, and it surely deserves to be mentioned along with other recent similar South Korean independent films such as “Steel Flower” (2015) and “February” (2017). In other words, this is another interesting South Korean movie of this year, and I recommend you to give it a chance someday. 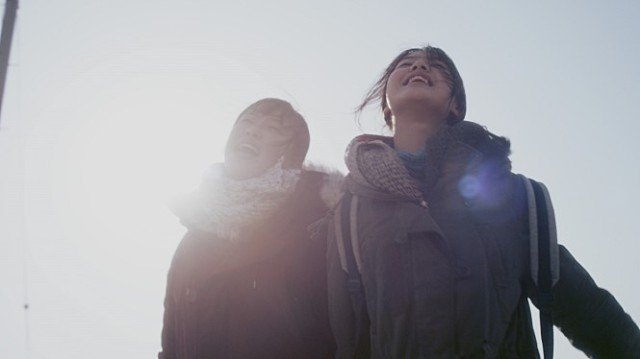 This entry was posted in Movies and tagged Family, South Korean Film. Bookmark the permalink.