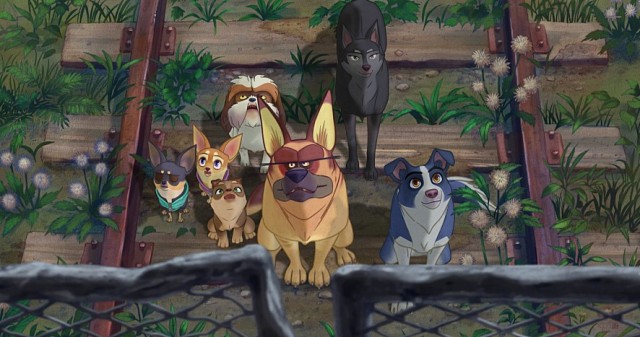 South Korean animation feature film “The Underdog” is something to be appreciated for several good reasons. While distinguishing itself as one of few notable South Korean animation feature films during recent years, the film is also equipped with good story and characters to engage and entertain young and adult audiences together, and it was a pleasure for me to observe how much several young audiences around me enjoyed the film.

The story of the film is mainly about Moongchi (voiced by Do Kyung-soo), a pet dog who suddenly finds himself abandoned by his owner at the beginning of the story. Left with a big bag of dog feed, he initially waits for his owner’s return like any good dog, but he eventually comes to understand his current status after encountering a bunch of abandoned pet dogs, and he soon comes to live with them in a nearby abandoned house located in a barren area which is going to be redeveloped sooner or later.

As spending time with his new friends, Moongchi comes to learn how to survive under his new reality. He must get accustomed to eating leftovers thrown away by humans, and he must always be careful whenever he is outside. There is a vicious dog hunter frequently going around in the area, and, as clearly shown from his first scene in the film, this mean guy is quite willing to catch stray dogs by any means necessary for his dirty benefit.

After hearing about a land where dogs can live freely without humans, Moongchi becomes interested in getting out of the area. Not long after he happens to enter a nearby mountain forest alone on one day, he encounters a trio of wild dogs who are hunting a boar, and he certainly comes to envy their free life, but they do not want him mainly because he does not seem to be capable of hunting for food. Determined to join the pack, Moongchi attempts to impress them, but, alas, his attempt subsequently leads to a disastrous consequence for not only him but also these wild dogs.

When these wild dogs decide to move to a safe place for them, Moongchi suggests that they should go to that land he previously heard about. They are soon joined by Moongchi’s friends who have no choice but to leave the area when the area begins to be redeveloped, and that is the beginning of their long journey which turns out to be not so easy for several reasons including the dog hunter, who becomes very determined to track them down as driven by his despicable personal motive.

In the meantime, Moongchi gets a bit closer to Bami (voiced by Park so-dam), a female wild dog who was once owned by the dog hunter. Although their first encounter was not exactly pleasant, Bami comes to like and trust Moongchi during their journey, and she has a poignant moment later in the story when she tells him about her sad, painful past, which certainly reminds us of how people can be quite cruel to dogs.

While the story becomes a little loosened when Moongchi and his fellow canine characters arrives at a spot where they experience unexpected kindness and hospitality, the movie still makes us aware of what is being at stake for them as the dog hunter continues to pursue them. Lee Jun-hyuk did a good job of imbuing his hateful character with enough sleaze and malice, and you may cheer a lot for what eventually happens to his character.

The other main cast members of the film also bring considerable life and personality to their respective characters. While Do Kyung-soo, who recently gave a spirited performance in “Swing Kids” (2018), holds the ground with his earnest voice acting, Park So-dam is excellent in her plucky voice performance, and so are other notable cast members including Jeon Sook-kyung, Yeon Ji-won, Park Joong-geum, and Park Chul-min, who effortlessly steals the show as he previously did in co-director/writer Oh Sung-yoon’s debut animation feature film “Leafie, A Hen into the Wild” (2011).

Despite its small production budget which partially depended on online funding campaign as shown from its end credits, “The Underdog” looks good on technical levels thanks to the diligent efforts from Oh, his co-director Lee Chun-baek, and their crew members. Sure, it looks relatively rough compared to those Hollywood animation films, but the film looks bright and colorful on the whole, and I enjoyed its occasional lyrical visual moments such as a peaceful scene accompanied with impromptu music performance. In my inconsequential opinion, this modest but competent animation film deserves to be watched by more audiences, and I also hope that its commendable achievement will lead to more good South Korean animation films in the future.