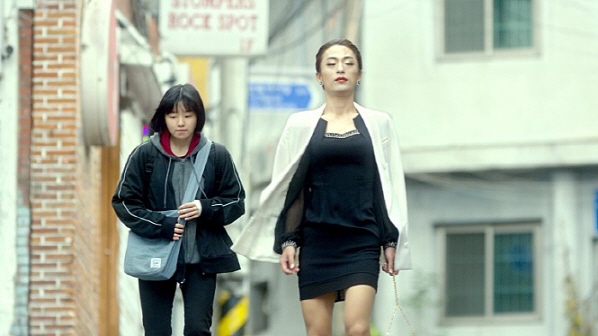 South Korean film “Jane” begins with one story and then proceeds with another story to tell. While these two stories feel different from each other, they are gradually connected with each other as the movie observes the harsh, despairing world surrounding its wretched heroine, and the emotional resonance between these two stories induces our empathy toward her even though she turns out to be very unreliable as the narrator of her stories.

The first part of the movie revolves around the accidental relationship between So-hyeon (Lee Min-ji) and Jane (Koo Gyo-hwan). So-hyeon, a young runaway girl who was recently left alone by a lad with whom she had lived in a motel room, tries to kill herself, but then there comes Jane, a transgender nightclub hostess who was close to that lad. After stopping So-hyeon’s suicide attempt, Jane takes So-hyeon to her small but cozy residence where she lives with three other young runaways not so different from So-hyeon, and we see how Jane functions as a sort of mother to So-hyeon and other young runaways in her residence. Never demanding anything to them, Jane is always nice and kind to them, and So-hyeon and her fellow runaways are happy to be under her care while also being grateful to her in return.

However, it turns out there is the deep unhappiness inside Jane. As reflected by one brief scene, her body is not that healthy, and we gather that her mind has struggled with depression. As a sexual minority on the fringe of South Korean society, she must have lots of pain and sadness inside her, but she keeps going on with her life while not losing the capability of kindness and compassion, and there is a poignant moment when she casually admits to So-hyeon and others that life is usually pretty lousy but also emphasizes why one should live for little happiness despite that.

For So-hyeon, Jane surely represents the little happiness coming into her gloomy life, and she often spends time along with Jane, but this happiness does not last long due to a sad, tragic incident which is followed by the second part of the movie. In this part, So-hyeon is in a much harsher condition; she happens to live in a small place along with other young runaways, and we soon meet the leader of the group, who is usually called ‘Daddy’ (Lee Seok-hyoung). ‘Daddy’ is not very nice to So-hyeon just because she does not get along very well with others, and there is an emotionally brutal scene where he and others corner helpless So-hyeon as accusing of something she did not commit. When Su-hyeon and other girls have to earn money for supporting the group, the movie only implies what they are demanded to do, but that is more than enough for us to sense and understand their grim reality.

The situation becomes grimmer as the group is shaken by an incident involved with one of the girls in the group who has been quietly trying to get away from the group. I will not go into details, but I can tell you instead that the movie is often gut-wrenching as showing how unforgiving the world inhabited by So-hyeon and other runaways can be. Whenever anyone happens to cross the line in their world, punishment inevitably and mercilessly follows, and we get a very tense moment later in the movie when So-hyeon faces the dire consequence of her unwise choice.

While it is baffling at times, the movie keeps holding our attention as anchored by its emotional narrative, which is steadily held by its lead actress’ stellar performance. Lee Min-ji, who previously drew my attention via her breakthrough turn in small independent film “End of Animal” (2010), ably conveys her passive character’s vulnerability in her low-key appearance, and she is quite effective especially during the last few minutes of the film. While she does not say anything at that point, her expressive face fully expresses her character’s emotional state to us, and that is why that moment is quite touching

The supporting performers of the movie are equally good in their respective roles. Koo Gyo-hwan is simply flawless in his colorful performance reminiscent of Cillian Murphy in “Breakfast on Pluto” (2005), and that is why we can feel his character’s presence hovering around the movie even when she does not appear on the screen. Lee Joo-young, who previously appeared in Zhang Lu’s “A Quiet Dream” (2016), is also fabulous as another crucial supporting character in the movie, and Lee Seok-hyoung and several other main cast members of the movie are convincing as the young runaway characters in the film.

“Jane” is the first feature film by director/writer Cho Hyun-hoon, and his movie is a haunting piece of work which distinguishes itself with its unforgettable mix of dry realism and poetic beauty while also being thoughtful on its social subjects. This is indeed a tough stuff to watch, but I can assure you that the movie is one of the best South Korean films in this year. 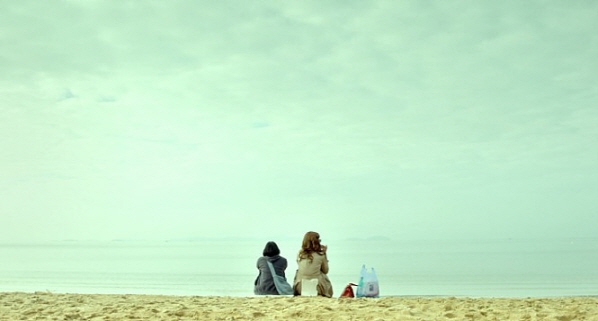