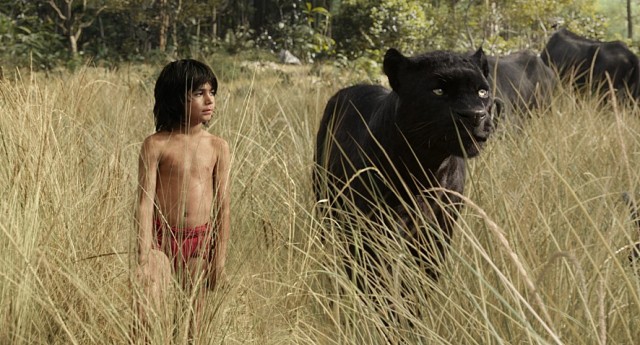 “The Jungle Book” is a refreshing experience for many reasons. While this is another Disney adaptation of Rudyard Kipling’s famous collective works, its bountiful fantasy world is brimming with the sense of unadulterated fun, wonder, and excitement, and I looked at its world with interest and curiosity. Its various animal characters are so vividly and colorfully presented through its top-notch special effects that these talking CGI creatures quickly become important parts of the story, and I often myself involved a lot in their respective interactions with our little feral human hero.

The adapted screenplay by Justin Marks faithfully follows a storyline which most of us are very familiar with thanks to the 1967 Disney animation feature film version. Since he was left alone in the jungle and then luckily found by a black panther named Bagheera (voiced by Ben Kingsley) when he was very young, Mowgli (Neel Sethi) has grown up under the care and protection of Bagheera and a clan of wolves led by Akela (voiced by Giancarlo Esposito). Akela’s wife Raksha (Lupita Nyong’o) loves Mowgli like her son, and Mowgli is virtually another brother to Raksha’s own cubs including Gray (voiced by Brighton Rose), though he becomes more aware of how he is different from his wolf family and many other animals in the jungle.

While Mowgli has been accepted as an exception anyway, there is one animal who strongly disapproves of Mowgli’s existence. He is Shere Khan (voiced by Idris Elba), and this fearsome Bengal tiger can alarm other animals even with his mere presence, as shown from the tense, disquieting scene of his first appearance. He wants to kill Mowgli because of his old grudge against human, and it is evident to everyone including Akela and Bagheera that nothing can stop Shere Khan’s vengeful determination. 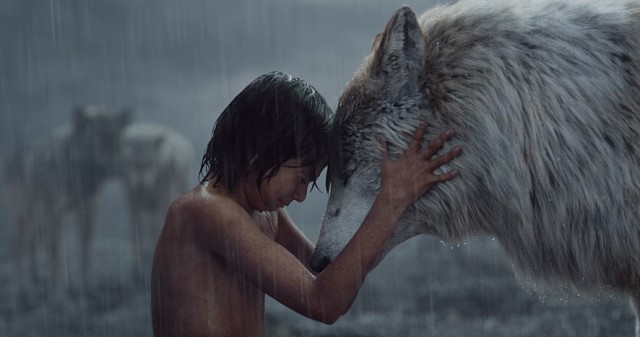 Mowgli eventually decides to leave for not endangering his clan, and Bagheera accompanies him for taking Mowgli to a human village outside the jungle where he can be safe. Of course, their journey turns out to be more perilous than expected, and Mowgli gets himself tumbled into the circumstance where he must defend himself alone in the middle of the jungle as trying to find a way to the human village.

As Mowgli’s precarious journey is being continued, the movie immerses us more into its fantasy jungle world which is alternatively gorgeous and dangerous. Although we know well from the beginning that most of its world is based on CGI, the movie is decorated with vibrant details tinged with care and imagination, and it serves us many wondrous visual moments to enjoy and appreciate. While the scenes featuring a herd of huge elephants are imbued with awe and majesty, the introduction of Kaa (voiced by Scarlett Johansson) is creepy and mysterious as this long, humongous python gradually reveals her presence around Mowgli. I also like a big, dilapidated temple which is the lair of King Louie (voiced by Christopher Walken), a megalomaniac giant orangutan whose dramatic appearance stands somewhere between “King Kong” (1933) and “Apocalypse Now” (1979) (To be frank with you, I have never imagined that I would mention these two great films together in one sentence).

The most humorous part in the movie comes from Baloo (voiced by Bill Murray), a laid-back bear who comes to befriend Mowgli by chance. After Mowgli helps Baloo through his smart ideas for getting what his bear friend craves for, they sing “The Bare Necessities” while having a pretty good time together, and this is one of several nice musical references to the 1967 version, whose three songs are delightfully utilized here while also being incorporated along with George Bruns’ score into the composer John Debney’s commendable hybrid work.

In case of a number of action sequences in the movie, they are visceral and exciting while never overshadowing story and characters. The director Jon Favreau is a good action director as shown from “Iron Man” (2008) and its 2010 sequel, and he steadily maintains the narrative momentum of his movie as its story hops from one point to another until it arrives in the expected moment of confrontation between Mowgli and Shere Khan. Rather than just being vicious and brutal, Shere Khan is depicted as a formidable foe with dignity and intelligence, and the climax sequence in the film really feels like a battle of two clashing wills especially when Shere Khan gleefully corners Mowgli into an impossible situation.

As the sole main human character in the story, young actor Neel Sethi gives an unadorned likable performance to function as the emotional anchor of the film, and it is the testament to his considerable talent as well as Favreau’s skillful direction that his character looks believable amidst heaps of CGI on the screen. The voice cast assembled around Sethi is impressive to say the least. As Bagheera, Ben Kingsley exudes wisdom and patience in his calm, commanding voice, and Lupita Nyong’o and Giancarlo Esposito are also solid as two wolves willing to protect their human cub as much as they can. Although I can hardly imagine him roaring like a bear, Bill Murray effortlessly imbues his own comic personality into Baloo, and Christopher Walken, another great natural scene-stealer, ably switches back and forth between humor and terror as his character cajoles and threatens Mowgli – and he also sings “I Wan’na Be Like You” with gusto for our amusement. While Scarlett Johansson is both silky and insidious in her lithe voice performance, Idris Elba brings simmering intensity and savage charisma into Shere Khan even when he is not ready for attack, and it should be noted that the movie features the last work of Gary Sandling, a wonderful comedian actor who died early in this year.

I often wonder whether I am too harsh on some of recent blockbuster films which dissatisfied me in one way or another, but good blockbuster films like “The Jungle Book” remind me that I should not lower my standard of entertainment at any chance. Favreau, who previously had a productive respite with his small charming comedy film “Chef” (2014), really wants to show something to us here, and he did a job pretty well with style and personality to distinguish his film from many other homogenized blockbuster films out there. I felt like being recharged and refreshed as I walked out of the theater after the movie was over, and I hope I will get similar experiences like this during the rest of the summer blockbuster season in 2016.

This entry was posted in Movies and tagged Adventure, Fantasy, Jungle. Bookmark the permalink.