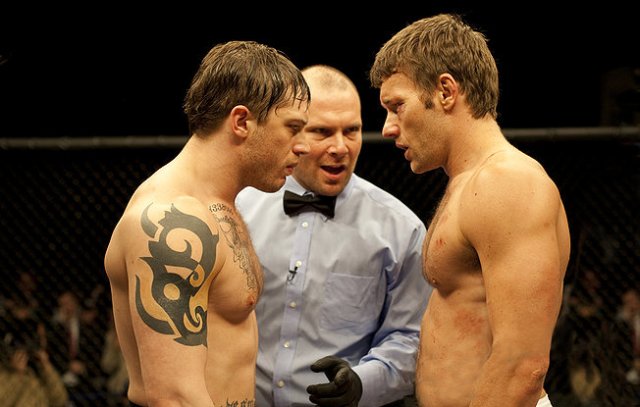 If you have watched its trailer or heard about “Warrior”, a sports drama about two brothers with the issues to settle down, you may have a pretty good idea about where they will be led to even before watching the film. I did, and I also had some idea about how it will resolve the conflict in the story – and it did not escape my prediction much. However, this sports/family drama film does more than we expect; while the match scenes are dynamic as required, the interactions between characters are also as sparky as them. The ring becomes an ideal place for their conflict, and, propelled by each own motive as well as the unresolved feelings between them, they fight like hell in the ring.

They and their father are the family with lots of, lots of, and lots of hurtful memories. When their father Paddy Conlon(Nick Nolte) comes across Tommy(Tom Hardy), one of his two sons and the one he favored more, Tommy is not so pleased about meeting his father, who must have been a raging alcoholic who made the life of Tommy, his brother, and his dead mother a living hell. Paddy has just returned from his AA meeting, and he wants to prove to his son that he is changed, but Tommy exudes passive hostility with remaining resentment and hurt toward his dad: “I think I liked you better when you were drunk.”

Tommy is an ex-marine returning from Iraq. He does not talk about his experience in the war, and he does not seem to have a future plan, but he has a goal. He goes to the local gym, and he instantly draws the attention from others in the gym when he knocks down a well-known MMA(Mixed martial arts) player preparing for the tournament with 5 million dollars as the grand prize. Through that surprise show, he gets the opportunity to fight in the tournament, and he enlists his father as his trainer, who was a skillful wrestling trainer for him and his brother when they were young. Tommy makes his intention clear to his father; he just wants Paddy as an expert he can rely on for the preparation, not as a father to reconcile with.

You may think that will be changed, but the conversation scene between them implies the hurtful past that cannot be disappeared easily. Paddy knows well about what he had done to his two boys. He has sought for the redemption and forgiveness. He has stopped drinking, and he is about to get a chip for 1000-day-sobriety, but that does not help mend his relationships with sons beyond repair. The movie does not go into details about how terrible he was as an abusive and alcoholic father in such an easy way like flashbacks, because we do not need to see that when we have the actor like Nick Nolte, who can bring the dark background and hidden personal demon to his character without dialogues. There are regret and guilt in his ragged face, but, in his eyes, there also remains an old devil who was once the fearful tyrant to his family. Tommy’s elder brother Brandon(Joel Edgerton) never forgets what his father was. He rejects his dad when he makes a surprise visit to his house to see his granddaughters.

Meanwhile, Brandon has his own reason to participate in that tournament. Leaving behind his time as a player in UFC, he has been living the life of an ordinary high school teacher with a loving wife and two daughters. However, due to his daughter’s illness, he and his wife have been struggling to pay the medical bills, and now there are only two options for him – the petition for bankruptcy or the eviction from their house. He does not want to lose their house, so, out of desperation, he comes to play in an illegal MMA match held in his neighbourhood. He earns considerable amount of money, but, because we live in the age of Internet, his nighttime activity is quickly known to everyone at his school. He gets the suspension as a consequence, so he pushes himself more to that direction with the help from his former trainer Frank(Frank Grillo), who is now more successful than before with his rather unorthodox training method.

While continuing to win in his matches, Brandon sees the big opportunity in the MMA tournament to solve his family’s desperate financial situation. Of course, he fortunately gets the chance, and he logically comes across the brother he has not seen for a long time. Tommy hates his brother as much as their dad because he is still angry about Brandon for leaving him with their ailing mother when they are young. Brandon does not like Tommy, either, though he wants to be nice to his estranged brother. Because blood is thicker than water, their relationship is more complex than a simple matter of hate and resentment – and it is bound to be brought upon the ring sooner or later.

After the patient build-up for the characters during its first hour, the movie goes right into the tournament. The way to the final is quite predictable, but the film compensates with the vivid presentation of the matches held in the ring – or the cage as they call in the film. I have no particular interest in MMA(as a matter of fact, I am not much interested in other sports, either), and I do not know about the rules, but the director Gavin O’Connor succeeds in making me cringe every time he shows the matches between the competitors in the tournaments. The choppy editing is a little bit distracting, but the message is clear: this is a brutal game in which players are not only punched and kicked, but also are thrown against the fence or the floor. The movements you have seen in the wrestling games are also allowed, which provide several intensive moments when the players are entangled with each other on the floor. Maybe it is exciting to watch them outside the cage, but this is not so exciting when you look at closely.

The characters stand firm amid these ruthless matches, and, as the two underdogs we equally care about, Tom Hardy and Joel Edgerton are believable whether they are on the ring or outside the ring; it shows that they went through the rigorous preparation for their respective roles. The movie also provides the space for fleshing out the important supporting characters including Brandon’s wife played by Jennifer Morrison, who naturally worries about her husband resuming his former violent career. The running time of the film is more than 2 hours, and I wonder whether South Korean distributors enhanced the film by trimming around 20 minutes, but I think it is not so overlong although it has several unnecessary scenes I can live without.

I watched “The Fighter”(2010), another sports/family drama, early in this year, and I sometimes think I was a little too harsh toward the movie with my 2.5 stars rating in spite of good things to be appreciated. But two elements in that film, sports and drama, are still felt disjointed to me. In case of “Warrior”, though it is more generic than “The Fighter”, these two elements are focused right together in the ring, and it does deliver what it promises to us with its effective finale. Sure, it’s predictable from the start, but it earnestly struggles, and we can agree to that it gets the payoff it deserves.